So, what is MARCoNS, and why the name? Why have you not heard about it before, and should you be reading about it? If you’ve ever been exposed to mold for a prolonged period of time, or if you have Lyme disease, this nasal infection could be causing you a lot of suffering.

An infection like this can make it far harder to treat and prevent other types of infection.

Mold, fungus, and the bacterium in Lyme disease are usually the underlying causes. Symptoms may affect the brain (memory loss, headaches, and depression) and may even cause extreme fatigue, an intolerance to exercise, and unexplained joint and muscle aches.

Lyme disease has been studied for decades now, but more recently, mold and fungus exposure are coming to the forefront.

Living, learning, and working in water-damaged buildings for a prolonged period of time and having genes that make you more susceptible to mold have become a well-recognized cause of chronic inflammation. Mold can be present in your environment, and you may not even know you’re being exposed. 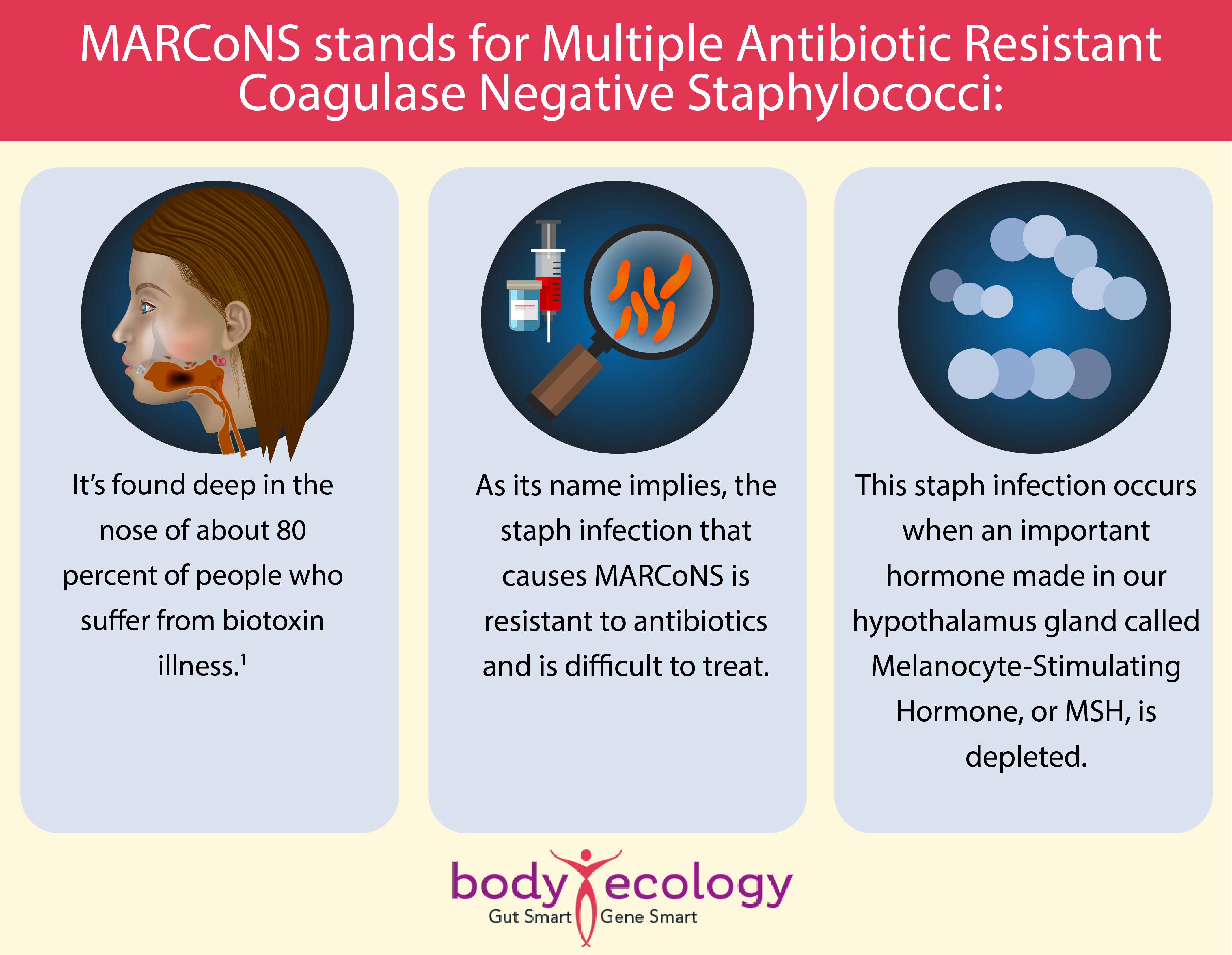 This hormone modulates the immune system, is anti-inflammatory, regulates other hormones, and controls nerve function.

Here’s how Walk-In Lab (that measures for MSH in blood) explains it:

These patients will be thirsty all the time, urinate frequently, and often will have unusual sensitivity to static electrical shocks. Forty percent of MSH-deficient patients won’t regulate male hormone production, and another 40 percent won’t regulate proper control of ACTH and cortisol.”

MSH is made when leptin, the hormone that tells us to stop eating when we have had enough food, hits its leptin receptor. But when the receptor is damaged by too much inflammation — and chronic, ongoing inflammation — the receptor doesn’t make MSH in the hypothalamus.

So, now that you’ve had a bit of background, let’s talk MARCoNS.

We’ve put together a series of articles to explain MARCoNS and its widespread connections to chronic health concerns, including chronic fatigue syndrome, chronic rhinosinusitis, chronic digestive issues (such as leaky gut), and even some cases of Alzheimer’s. We’ll also look at potential therapies to eradicate MARCoNS, as well as its links to chronic Lyme disease and mold exposure.

We’ll start with a quick overview of MARCoNS, which again is short for multiple antibiotic-resistant coagulase-negative Staphylococci.

Remember biofilms? Well, they’re back, and they could be the cause of chronic inflammatory response syndrome (CIRS) and a wide range of chronic health concerns. They could even be contributing to your long-hauler’s symptoms.

Let’s imagine you tested positive for MARCoNS. What does this mean?

Put simply, it means a nasal swab, skin swab, or other tissue sample was found to contain a particular type of bacterial staph infection called coagulase-negative Staphylococci. These bacteria are a subtype known to be resistant to (i.e., not killed by) a number of commonly prescribed antibiotics.

More than half a century ago, penicillin was the go-to antibiotic treatment for Staphylococcus infections, but CoNS have been highly resistant to penicillin since around 1968.2 Penicillin resistance is now thought to be around 91 percent in clinical strains.3

Unfortunately, these antibiotic-resistant bacterial strains are big on knowledge sharing. They like nothing more than to form a cozy biofilm to live in and where they can transfer genetic information to other types of bacteria.4 This results in an increasing number of bacteria that know how to resist more and more antibiotics.5 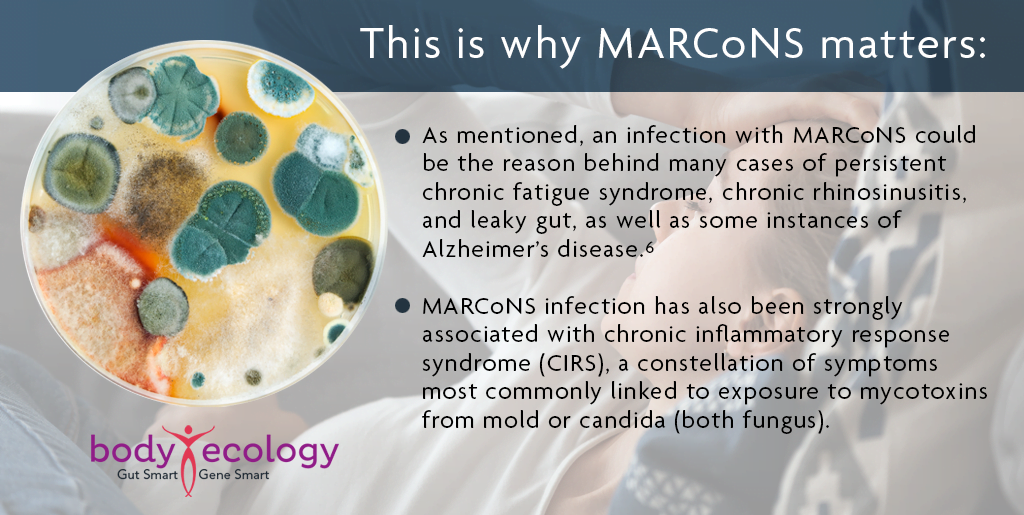 Mycotoxins are toxins produced by bacteria or fungi. These microorganisms are often found in water-damaged buildings riddled with mold and include Stachybotrys, Penicillium, and Aspergillus.

CIRS may also originate from other types of biotoxins.

These include the bacterium that causes Lyme disease, Borrelia burgdorferi, other tick-borne pathogens, and dinoflagellates and other water-borne aquatoxins.

Not everyone who’s exposed to these microorganisms develops a serious or chronic infection. A lot depends on your immune function, the type of microorganism, access to and the efficacy of treatment, and good old genetic predispositions. Genetics also plays a role in your sensitivity to mycotoxins.

Another reason why MARCoNS matters is that an infection like this can make it far harder to treat and prevent other types of infection. Biofilms commonly form on medical devices, such as prostheses and catheters, as well as dentures.

If these biofilms contain the MARCoNS staph bacteria, they present a high risk of horizontal gene transfer — whereby the Staphylococcus bacteria can pass on knowledge to other pathogens of how to hide from and withstand common antibiotics (as noted above), as well as your own immune system’s efforts to eradicate these pathogens.7

How does MARCoNS affect your body? And what can you do about it?

Infection with MARCoNS and resulting chronic inflammatory response syndrome (CIRS) has been associated with a range of abnormal hormonal and immune system activities — including high levels of the stress hormone cortisol and low levels of zinc, an essential mineral for immune function, reproductive health, digestion, and many other aspects of optimal health.6

This also includes increased levels and/or activity of:8

Additionally, CIRS has been associated with decreases in:8

We’re going to look at a range of these effects in greater detail in subsequent articles, including examining the links between MARCoNS and chronic Lyme disease symptoms, as well as the association between MARCoNS, leaky gut syndrome, and allergies.

So, what can you do about it? Because the term MARCoNS is mostly used by practitioners of alternative medicine who work outside the orthodox medical establishment, it’s hard to find hard research and scientific studies on treatments for MARCoNS per se. However, researchers have published studies showing that some antibiotic drugs do still work against CoNS, including a drug called daptomycin.9

Some functional medicine practitioners are having success treating CIRS with a complex, multi-part regimen that involves addressing all of the hormonal, gastrointestinal, and other biochemical concerns, in addition to:

It’s important to note that growing antibiotic resistance is attributed in large part to the rampant misuse of antimicrobial agents in animal agriculture as a growth promoter. The spread of drug-resistant bacteria may also potentially lead to contamination of milk and meat.

Once again, we see that it matters where our food comes from — including any foods we intend to ferment at home, such as milk used to create kefir, for example. Ensuring milk, meat, and other foods come from a trusted, organic source is vital.

Finally, some practitioners have turned to natural antimicrobial agents in the fight against MARCoNS. Later in this series, we’ll look at how essential oils may have a role to play in keeping us all safe from antibiotic-resistant strains of dangerous bacteria. 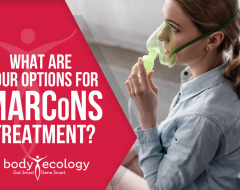