What causes Alzheimer’s and dementia? The APOE4 gene variant has been associated with a higher risk of Alzheimer’s disease (AD), but it’s not the only factor thought to contribute to this type of neurological decline.1 Increasingly, researchers are investigating the damaging effects of microbial infection of the central nervous system and even the toxins produced by fungi, such as Candida albicans.

What does APOE have to do with Alzheimer’s and dementia? 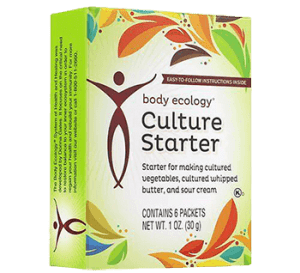 If you’re serious about fixing your gut and making candida a thing of the past, fermented foods can support you on your journey. Use our Veggie Culture Starter to make home fermenting a breeze.

The APOE is a gene that creates a protein called apolipoprotein E (APOE). This protein binds to fat to create lipoproteins (fats bound to proteins), which help carry cholesterol around the bloodstream and are mainly responsible for carrying fats to and from the brain and central nervous system.

Research in mice has shown that Candida albicans can cross the blood-brain barrier and enter the brain.

As you know, good fats play a vital role in brain function. Basically, we all have a fatty brain.

So, why all the fuss about APOE4? Large studies show that of the three major forms of the APOE gene, two are associated with a greater risk of certain diseases and conditions.

The three variants are:

APOE3 is the most common form of the gene and is considered neutral in terms of health risks. You are fortunate if you have this version of the APOE gene. We won’t say much about E3 here.

Having variants in the APOE2 gene is a risk factor for high triglycerides.2 If you have variants in APOE2, then it’s very important to avoid sugars in your diet. Sugars are inflammatory and may also promote brain inflammation, which may contribute to Alzheimer’s.

APOE2 is linked to a higher risk of cardiovascular disease, which may be because this variant of the gene seems to limit how dietary fat is filtered from the blood.3 While not directly related to Alzheimer’s disease risk, carrying the APOE2 gene variant may indirectly increase the risk of neurological disease by interfering with blood flow in the brain.

For those with APOE2, certain foodstuffs could be beneficial, such as nattō, made from fermented soybeans.

This contains an enzyme called nattokinase that is synthesized by the bacteria that ferment the soybeans. Nattokinase is a very powerful clot-buster — helping to break up fibrin blood clots, which could offset some of the cardiovascular risks associated with the APOE2 gene.4 If finding and eating nattō is highly unlikely for you, nattokinase is also available as a dietary supplement in your health food store.

Finally, APOE4 is the variant most associated with an increased risk of Alzheimer’s disease and other neurological conditions.1 It isn’t, however, at all clear why this variant increases a person’s risk of AD. Potentially, this variant might affect the development of neurites, part of the brain’s neural network.5

There is certain agreement within the scientific community that those with the APOE4 genotype may fare badly on a diet high in the processed fats and inflammatory seed oils that are so pervasive in our diets today. These may cause a dramatic increase in brain inflammation.

This genotype should strictly avoid these inflammatory foods and may do best on a diet higher in anti-inflammatory dark green and root vegetables, obtaining their animal protein from grass-fed animals. Grass-fed animals have a higher ratio of omega-3 fats.

The top 5 risk factors that could cause Alzheimer’s disease

The APOE gene is just one genetic factor in the development of AD and may have the most impact later in life as the risk of AD doubles every five years after the age of 65. For those with early-onset AD/dementia, however — which is considered a diagnosis before the age of 65 — three other genes may be significant.

APP is the gene that encodes amyloid precursor protein, which influences the formation of amyloid plaques in the brain.

Aside from genetics, though, there are five key risk factors thought to contribute to around a third of all cases of AD. These are:

We all know that getting regular, daily exercise and avoiding being sedentary has a range of benefits for health, but research also suggests that this can reduce amyloid plaque formation, even in those carrying an APOE4 variant.6

Another potential risk factor is also under investigation: microbial infection.

How much do you know about what’s hiding in your genes? Listen in on these incredible interviews from the Genius of Your Genes Summit for free.

Could Alzheimer’s be linked to candida? It’s likely.

A paper published in 2015 in the journal Nature revealed that samples of brain tissue from people who had died from Alzheimer’s disease contained fungal cells and hyphae.7 In the study, all samples of brain tissue from AD patients showed fungal infection, whereas samples from control patients without AD were not infected. The researchers also found fungal infection in blood cells, which they linked to the vascular damage seen in people with AD.

Research in mice has shown that Candida albicans can cross the blood-brain barrier and enter the brain, where it triggers inflammatory processes and leads to the formation of abnormal structures similar to the plaques seen in AD. These changes and inflammation were linked to spatial memory impairments in the mice infected with Candida albicans in this study.8

Candida albicans and other opportunistic pathogens, such as the mold Aspergillus fumigatus, are known to produce gliotoxin, a substance that has immunosuppressive properties.9 Glutathione can partially counteract these effects.

Other studies have also found that:

All these connections aren’t particularly surprising when we think about how microbial infections affect the entire body and, logically, would also affect the brain.

Aside from cognitive decline, most people with AD/dementia have elevated levels of inflammation, damage to blood vessels, changes in how and when brain cells multiply and die, and the formation of plaques in the brain. Researchers have found higher levels of several cytokines involved in inflammation, including interleukins 1 and 6, tumor necrosis factor alpha, and interferon gamma, in people with AD.17

Take action: What can you do to reduce risk of Alzheimer’s/dementia?

Given what we know about the causes of Alzheimer’s and dementia, there are many steps we can all use right away to reduce the risk of developing the condition.

In addition to stopping smoking, achieving a healthy body weight, and getting regular exercise, it can help to:

And finally, including probiotic-rich, fermented foods and liquids into your diet on a daily basis will help ensure a wide diversity of these beneficial microbes in your colon.

While this is not yet an area of research that’s directly linked to Alzheimer’s, it’s logical that they may be shown to have an important role in keeping cognitive decline at bay. Not only does a healthy microbiome help to control pathogenic organisms. It can help to better manage whole-body inflammation, maintain your immune system, and support a functional gut-brain axis, helping to benefit cognitive wellbeing for life.18