Science Has a New Answer for Addiction: Here’s What You Can Do About It

Addiction is commonly considered an issue with personality or chemical imbalance. However, science is starting to provide evidence that inflammatory signals in the brain are key in the development of addictive behavior.

While inflammation in the brain does not directly lead to addiction, it does increase the risk of dependence. (10)

Researchers at the University of Colorado Boulder explain that this new understanding expands the scope of medications that can be used to treat drug and alcohol addiction. (1)

Addiction therapy should not only target brain chemicals—it should also target the immune system and inflammation.

Other research points out that inflammation in both the gut and liver—common in alcoholics—leads to inflammation in the brain. In animal studies, compounds that shut down this inflammatory “pathway” could reduce signs of alcohol dependence. (2) 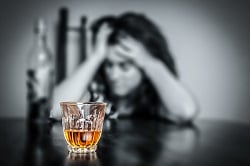 Removing inflammatory triggers in the diet can calm inflammation in the body and in the brain. Shutting down inflammatory pathways could reduce signs of alcohol dependence.

The immune cells that protect the body from infection cannot cross the blood-brain barrier, a thin layer of tissue that separates the central nervous system from the blood that circulates throughout the rest of the body. But the brain isn’t defenseless against infection or the buildup of toxic debris. Instead, specialized cells called microglia are the brain’s first line of defense.

Microglia are the brain’s immune system.

These immune cells are constantly on the move, looking for damaged neurons, debris, or potential infection. In order to protect brain tissue, microglia are extremely sensitive and react to the smallest change in the brain. They can quickly engulf sick neurons and release a storm of inflammatory signals.

Alcohol and many drugs are pro-inflammatory.

One study published in Pharmacology and Therapeutics shows that once microglia are activated by addictive drugs, inflammation dominates the immune system in the brain. This then works synergistically with the “neurocircuit of reward and dependence,” or drug addiction. (3)

Microglia have opioid receptors. (4)(5) Opioid drugs—such as heroin, morphine, Vicodin, and Percocet—as well as alcohol, methamphetamines, and cocaine provoke inflammation in the brain. (6)(7)(8) These substances are also notoriously addictive.

Krisztina J. Kovács at the Institute of Experimental Medicine in Budapest, Hungary, suggests that “neuroinflammation is indeed a general and critical component in the development and maintenance of drug abuse.” (9)

And while inflammation in the brain does not directly lead to addiction, it does increase the risk of dependence. (10)

The Body Ecology Diet Principle of Step by Step tells us that healing isn’t an overnight phenomenon. It takes time, dedication, and commitment.

In order to cleanse the body of toxins and reduce inflammation, it is essential to work with diet:

1. Remove Common Inflammatory Triggers: Foods that trigger inflammation include gluten and most grains. (11) Instead of gluten-filled grains or grains that may cross-react with gluten, we suggest using grain-like seeds, such as buckwheat, millet, quinoa, and amaranth. The protein in milk, known as casein, may also be a trigger food for you. While in the initial stages of healing, remove foods that contain milk.

Sugar can feed any chronic, low-grade infection in the body. Be sure to remove all foods that contain added sugar—instead, use stevia to sweeten foods or choose sour fruits, such as lemons, limes, berries, and Bing cherries.

These microbes help cleanse the body of toxic waste, while supporting a reduction in inflammation. They work with your immune system. They help to control the inflammatory messages that are carried through the blood-brain barrier and into brain tissue.

3. Cook with Anti-Inflammatory Herbs: One of the most important herbs to include in your diet is turmeric.

This is because turmeric contains a plant chemical called curcumin. (12) Curcumin reduces inflammation and naturally increases your production of anti-inflammatory compounds, like cortisol. (13)(14)

4. Support Your Liver: The job of the liver is to transform toxic waste, dumping less harmful debris into the colon where the body can eliminate it.

Donna created LivAmend with milk thistle, wasabi, artichoke leaf, and sarsaparilla. These herbs help to reduce inflammation. They also give the liver the tools it needs to cleanse, while gently stimulating the colon to release waste.

While inflammation in the brain will not cause addiction, it can increase the risk of dependence.

Addiction recovery certainly won’t happen overnight, but you can help to rehabilitate your body and brain step by step: