Psychobiotics: How fermented foods lift your spirits and lower stress

The microbiome has a profound influence on many bodily systems and while much of the focus has been on the benefits of probiotics for gut health, a study published in the journal, Microbiome, in May strongly suggests that fermented foods like milk kefir can affect behavior and mood. In this article we take a look at the gut-brain axis, take a trip to vagus (nerve that is), learn more about psychobiotics and dig into the science behind ‘that gut feeling.’

Kefir and the gut-brain axis

In this recent study, researchers set out to investigate whether milk kefir could affect the behavior and emotional state of mice in the laboratory.[1] The mice were separated into three groups and fed one of two types of kefir or an unfermented milk as a control. They then underwent an array of tests to assess their behavior, and the researchers also looked at measures of systemic immune function and gut serotonin levels. 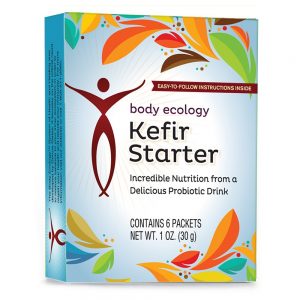 Recent research shows how an imbalanced gut not only causes gastrointestinal upset, it may also lead to anxiety, difficulty concentrating, mood disturbance, and other emotional and cognitive effects. Optimizing your gut health by eating a diet rich in fermented foods, including milk kefir (made with an A2 milk and only if you can tolerate dairy), is seen as a sound way to support healthy brain function and a greater capacity for handling stress.

Results revealed that the kefir groups were less stressed and showed lower levels of repetitive behavior (linked to stress) under test conditions. The mice also performed better in memory tests under fear conditions and had a range of benefits for immunity including increases in the prevalence of Treg cells that help regulate immune function. When the researchers analyzed the gut microbiome of the mice, they found that “both kefirs significantly changed the composition and functional capacity of the host microbiota [which] increased the capacity of the gut microbiota to produce GABA.” This increase was linked to an increase in the probiotic Lactobacillus reuteri.

The authors of the study concluded that kefir modulated mouse behavior through the ‘microbiota-gut-immune-brain axis’ and that the fermented beverage had a positive influence that suggests, “broadening the definition of psychobiotic to include kefir fermented foods.”

So, to broaden the discussion, let’s look more closely at the gut-brain axis and what we mean by psychobiotics.

What happens in vagus

The vagus nerve is a direct line between your gut and your brain. This communication pathway is bidirectional, meaning that whatever’s going on in your gut can influence your brain and whatever’s happening in your brain can affect your gut.

For most of us, this feels intuitive. We all know that ‘butterflies’ feeling when we’re nervous. And if you’ve ever experienced digestive upset for any reason, chances are it’s also affected your mood in turn.

So, how does this gut-brain connection work and, furthermore, how can we make it work to enhance health?

There is a whole host of ways in which the beneficial bacteria (probiotics) in your gut can affect your mental and emotional state. The microbiota in your gut can, for instance, influence the synthesis of neurotransmitters, including gamma-aminobutyric acid (GABA), serotonin, catecholamines, and acetylcholine. These neurotransmitters have a direct effect on brain function, affecting your mood, how you think and feel, and even your behavior.[2]

Another way in which probiotics affect the gut-brain axis is by inhibiting the overgrowth of pathogenic organisms in the gut. These pathogens can produce substances that have a negative effect on your mood, including pro-inflammatory molecules.[3] [4]

Lactobacilli and Bifidobacteria make up most of the bacteria in your gut, and these species can have a profound effect on inflammation and immune system activity, with knock-on effects for brain function and mood.[5] (Bercik & Collins, 2014).

Conversely, your mood and emotional state can affect your gastrointestinal system, again via the vagus nerve (Bercik & Collins, 2014). Prolonged and severe stress can have a hugely detrimental effect on your gut health, creating something of a vicious cycle up and down your vagus nerve.

How can you use fermented foods and probiotic supplements to break this cycle? Let’s look at some specific examples.

Lactobacillus helveticus R0052 and Bifidobacterium longum R0175 are two of the best researched probiotics in the realm of psychobiotics. These bacteria support the body’s stress response system or hypothalamic-pituitary-adrenal (HPA) axis and can reduce levels of cortisol, the ‘stress hormone,’ which helps to relieve anxiety and can help lift your mood.[3]

L. helveticus R0052 and B. longum R0175 also reduce a variety of inflammatory markers and affect your levels of the neurotransmitters tryptophan and serotonin. It’s not surprising, then, that the combination of these probiotics has been associated with improvements in anxiety and nervousness, sleep quality, mood, and even symptoms of depression such as lack of enjoyment in normal activity (known as anhedonia).[6]

These two probiotics have also been associated with relief from abdominal pain, which may be partly related to their ability to significantly reduce levels of gut-derived lipopolysaccharides (LPS).[7] These molecules are critical in the development and progression of chronic low-grade inflammation and metabolic diseases.[8]

Even short-term use of Lactobacillus gasseri CP2305 has been seen in studies to improve stress-associated symptoms and clinical symptoms in healthy young adults and adults with irritable bowel syndrome, respectively. A study in 2019 looked at the use of L. gasseri CP2305 longer-term. In this study, 60 healthy Japanese medical students (41 men and 19 women) who were preparing for their national examination for medical practitioners received either the probiotic or a placebo once a day for 24 weeks leading up to the exam.

The trainee doctors in the probiotic group had significantly reduced anxiety and sleep disturbance relative to placebo. They were also somewhat protected against typical stress-related depletions in beneficial Bifidobacterium spp. and increases in pathogenic Streptococcus spp. Overall, the researchers concluded that long-term use of L. gasseri “may improve the mental state, sleep quality, and gut microbiota of healthy adults under stressful conditions.”[9]

Many probiotics also help reinforce the intestinal barrier by improving epithelial health (Lu & Walker, 2001). And, with a healthier intestinal barrier, there’s less chance of pathogenic organisms entering the blood from a leaky gut.

Many gastric acid-resistant probiotics help to prevent pathogens from colonizing the gut.4 [10] [11] Our old friend L. helveticus R0052, for instance, prevents Escherichia coli O157:H7 from sticking to cells in the intestine, and B. longum subsp. longum can also inhibit the ‘stickiness’ and activity of food-borne pathogenic bacteria.[9] [12]

Finally, lactic acid producing probiotics (found in fermented vegetables) increase levels of antioxidant enzymes including glutathione-S-transferase, glutathione, glutathione reductase, glutathione peroxidase, superoxide dismutase and catalase.[13] And with better antioxidant protection of brain tissue, the more likely you are to stay cognitively sharp and healthy as you age. And, because the gut-brain axis might also affect brain inflammation, this has ramifications for healthy aging and cognitive acuity later in life.[14] [15]

A systematic review published in 2017 assessed ten studies looking at the effects of probiotics on symptoms of depression. The reviewers concluded that the majority of studies found evidence that probiotics were beneficial across all measures of depressive symptoms.[16]

One double-blind, placebo-controlled, randomized, parallel group study involved healthy adults who took 3 billion colony forming units (cfu) of Lactobacillus helveticus (R0052) and Bifidobacterium longum (R0175) for 30 days. By the end of the trial, those taking the probiotics had significantly reduced psychological distress. Those who continued taking the probiotic had a 22% improvement in general condition by the second month, and a 36% improvement by the fourth month. This included improvements in activity, elation, fatigue, and agitation. Interestingly, the level of cortisol in the volunteers’ urine also decreased.[17]

B. longum, B. breve, and L. rhamnosus have been seen in animal and human studies to have positive effects on learning and memory, as well as feelings of nervousness and low mood.[18] B. longum has been associated with improvements in learning, sensory processing, and memory,[19] [20] and probiotics were even seen in one study to help reduce stress-related physical symptoms in medical students taking exams![21]

B. longum has also been seen to protect brain cells that are typically damaged after a heart attack.[22]

If you’ve been unlucky enough to have to take antibiotics recently, you may also have noticed a change in your mood as well as gastrointestinal upset. This is borne out by research linking antibiotic use to an increased incidence of depressive symptoms and anxiety. In one paper, researchers noted that dysbiosis can, “increase the risk of several psychiatric conditions through neurologic, metabolic, and immunologic pathways”.[23]

In the UK, researchers carried out three nested case-control studies involving the medical records of 202,974 patients with depression and 14,570 with anxiety, and 803,961 and 57,862 matched controls, respectively. Their conclusion? Individuals who had taken a single penicillin antibiotic a year before diagnosis had a 23% increased risk of depression. Those who had taken quinolone antibiotics had a 25% increased risk. If a person had taken 2-5 courses of antibiotics, the risk rose to 40% for a diagnosis of depression. For people taking more than 5 courses of penicillin, the risk was increased by 56%. As for anxiety, a single course of penicillin increased the risk by 17%, while the risk increased 44% for more than 5 courses of the antibiotic.22

Shockingly, animal research suggests that these troubling effects of antibiotics and invading pathogens can happen very quickly. Where researchers have deliberately introduced pathogens into animals’ guts, this has triggered symptoms of anxiety within seven to eight hours of colonization.3 Some pathogens have even been associated with an almost immediate increase in anxiety-like behaviors and aggression in animals.3 5

Research carried out in the last few years leaves no room for doubt that bacterial imbalance in the gut not only causes gastrointestinal upset, it also leads to feelings of anxiety, difficulty concentrating, mood disturbance, and other emotional and cognitive effects. Optimizing your gut health by eating a diet rich in fermented foods, including milk kefir (made with an A2 milk and only if you do well on dairy), is increasingly seen as a sound way to support healthy brain function and a greater capacity for handling stress.

For a lot of us, our usual stress management strategies are off-limits right now, such as going to the gym, yoga class, or spending time in person with friends and family. And chances are that your stress levels are higher than usual to boot! So, while it’s not a panacea, probiotic foods, milk and coconut kefir and fermented veggies—rich in the diversity that supplies many species of beneficial bacteria—are great tools to add to your stress-busting arsenal. Add them to your diet, if you haven’t already, since they help support immune function and all-round great health.

PS.  If you’ve been looking for another reason to add milk kefir to your diet, it turns out that this fermented beverage is not only delicious and super easy to make, it also has mood-boosting, stress-busting properties!