This Ancient Food Has Finally Made a Comeback!

Written by Donna Gates on July 2020

While you may be hearing a lot more about them, fermented foods are not a new health fad. They date back many thousands of years and were an essential early technique used by man to preserve food.

For most of history, refrigeration, as we know it, simply didn’t exist. While the icebox was introduced in 1860—at a whopping cost of six to eight dollars—it wasn’t until the end of the 1940s that refrigerators became a common feature of American homes. If you are a baby boomer you may remember the clunky design of the earlier refrigerators, but if you belong to a younger generation you’ve probably never given refrigeration a second thought. Basically, refrigeration is not only a very recent luxury, it’s a taken-for-granted survival tool.

So how did early humans store food? If food wasn’t eaten rather quickly it spoiled, so early humans learned to smoke, dry, salt or later, can the food. In the fall, root vegetables were stored in cellars and if the climate supported it, during the winter months, holes were dug in the ground and food was put out in the snow. It’s fairly accurate to say, if it were not for these survival foods, we wouldn’t be alive today. 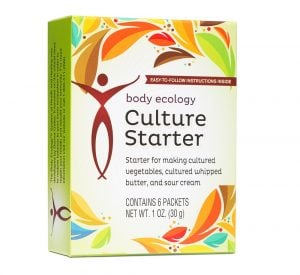 Your body needs folate to synthesize and repair DNA. Only one Lactobacillus probiotic, the same bacterium found in the Veggie Culture Starter, can make natural folate in the gut.

Fermentation has always been a way to preserve food. This is because the fermentation process keeps food (like cabbage, root vegetables and milk) from spoiling with active enzymes and beneficial bacteria. The texture and flavor did change a bit, but this was also quite enjoyable. People enjoyed the sour taste and knew that it should be included in the diet. (By the way, sour helps diminish our desire for sweet foods.)

Today we have a greater understanding of the importance of the microbiome in our digestive tract and now fermentation and fermented foods have moved to the forefront as superfoods. It’s good bacteria and yeast that make fermentation possible. These microbes in the fermented vegetables and milk promote health in many ways including educating and strengthening our immune system.

Fermented foods are said to be anti-aging foods and research on the microbiota in them have been shown to help protect against modern disorders like diabetes, allergies, and autoimmune disorders. Even mood improves when fermented foods are eaten. Researchers have discovered that today’s modern health problems are linked to a lack of diversity in the beneficial microbiota living in the gut. What’s really special about fermented vegetables as we teach you to make them (and Body Ecology’s probiotic liquids) is their diversity.

The how and why of diversity?

At Body Ecology, we have recommended the addition of fermented vegetables to your diet for over 20 years. We don’t call them sauerkraut because sauerkraut is traditionally made with just cabbage. And we strongly recommend you make yours with a variety of vegetables and even sea vegetables and herbs.

Fermented or cultured veggies actually have certain benefits over just taking a probiotic supplement. What’s special about them is their microbial diversity. While probiotic supplements are also valuable, they are made by man and don’t have what we call “the wisdom of Nature factor.”

Imagine that you want to ferment these five vegetables: cabbage, carrots, garlic, onion and ginger.

Each of these vegetables grew in a field and from the very beginning of its life the vegetable was covered in beneficial bacteria. These bacteria formed a sophisticated “symbiotic relationship” with each other as the plants grew in the field.

When you bring those vegetables into your kitchen, cut them up and ferment them you are eating an amazing diversity of beneficial bacteria as well as the wonderful “wisdom” of Nature.

In order to create a consistently successful batch of fermented vegetables, Body Ecology recommends using a starter culture. Starter cultures greatly enhance the number of beneficial microbes in the finished recipe. Our starter culture adds far more Lactobacillus plantarum, a superstar among the other microbial alchemists. This amazing “key stone” bacteria that makes folate is resistant to most antibiotics, is antiviral, degrades histamine, and eats oxalates.

There’s so much more to say about cultured veggies and the microbiota that live invisibly inside them. Yes, we’ll never be able to see them in their vast numbers in that jar, but they’re in there working on your behalf. And since you can’t see them, it’s hard to believe that eating a few spoonfuls or two with your biggest meals of the day can do so much for your health. But our ancestors knew. And perhaps, like our ancestors, we may once again consider them to be survival foods. I certainly do.