Ever wonder how some people can down an espresso right before bed and sleep like a baby, while others have a half-caf latte first thing and still feel jittery at night? Like many things, how you metabolize coffee (well, caffeine) is massively influenced by your genes.

Some people could have caffeine lingering in their system up to 22 hours after a single cup of coffee.

The CYP1A2 gene gets most of the attention when it comes to caffeine metabolism, but there’s another gene, AHR, worthy of scrutiny too. AHR is also an interesting gene for anyone curious about the detoxification of xenobiotics, so be sure to keep reading for a good grounding in coffee and genetics.

What is CYP1A2, and why should it matter to you?

How you respond to caffeine — whether you’re a fast or slow metabolizer — depends on the version of the CYP1A2 gene you carry.1 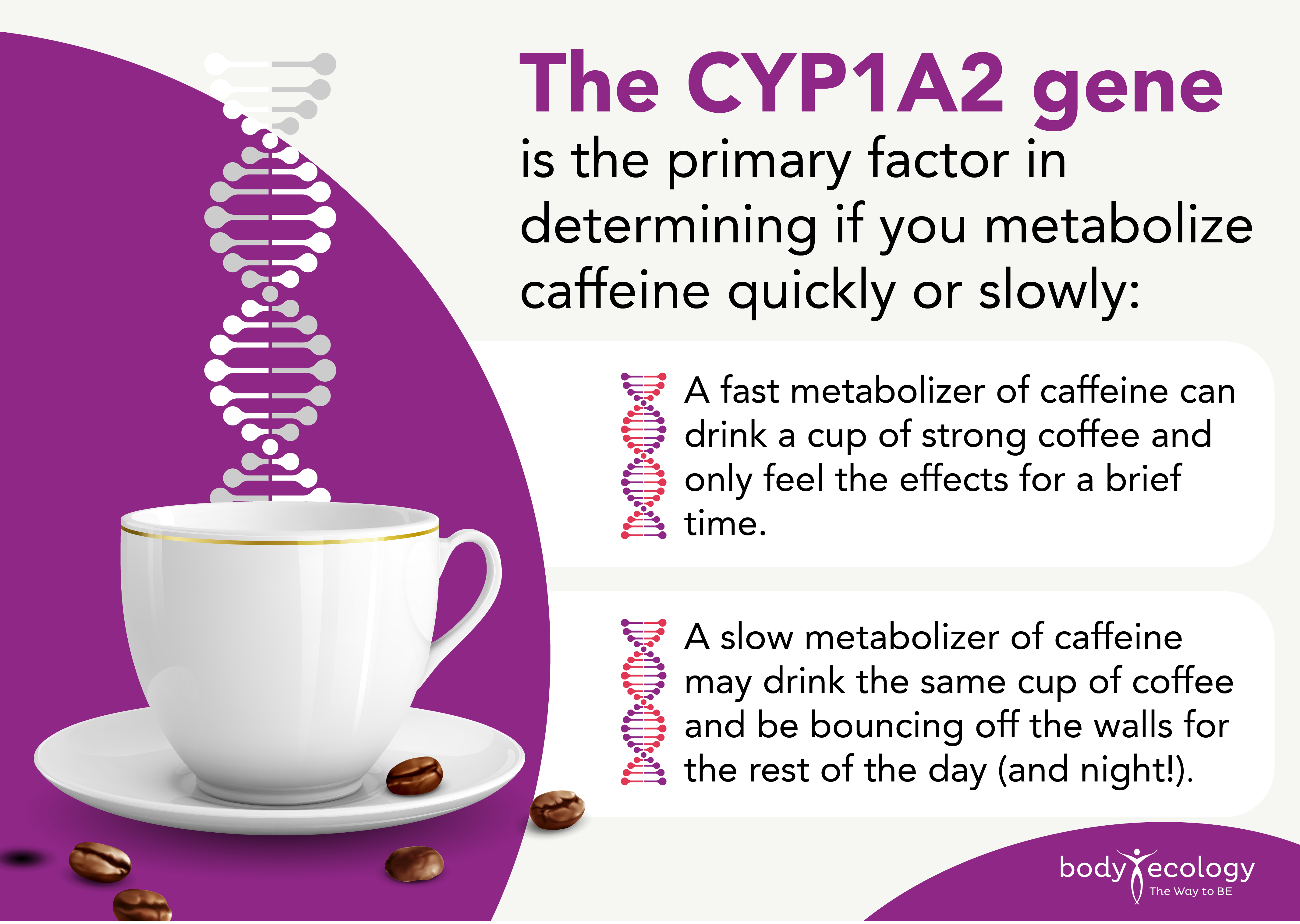 The CYP1A2 gene codes for (or, it has the instructions for) the cytochrome P450 1A2 enzyme needed by the body to break down caffeine. Lower enzyme production means slower clearance of caffeine from the body, which means you feel the effects for longer.

And what are those effects?

Want to dive deeper? Sign up for our Genius of Your Genes Summit now.

The ADORA2A gene, for instance, is responsible for making a protein involved in the receptor for adenosine, a neurotransmitter that causes sleepiness. This gene is also linked to caffeine-associated insomnia; variants in ADORA2A that affect production of the adenosine receptor protein may contribute to a significant and chronic lack of sleep.

In one study, a variety of variants of the ADORA2A gene, including C, T, and G allele variants, were associated with changes in total sleep time when consuming caffeine.4 Essentially, caffeine blocks adenosine signals, making it harder to get to sleep and more likely you’ll miss out on deeper, more restorative sleep.

AHR is another gene involved in caffeine metabolism. This gene codes for a protein (the aryl hydrocarbon receptor, AhR) that influences how and when the CYP1A2 gene is switched on and off. The C allele of the AHR gene (which is carried by about 49 percent of the population) is thought to increase the activity of the AHR protein, leading to increased CYP1A2 activity.5

This variation or allele is more often seen in people who drink a lot of coffee, likely because anyone without this allele feels more negative effects from caffeine.6

AHR also detects environmental pollutants — such as dioxins, which are potential contaminants in chlorine-bleached products, air, and wastewater.6 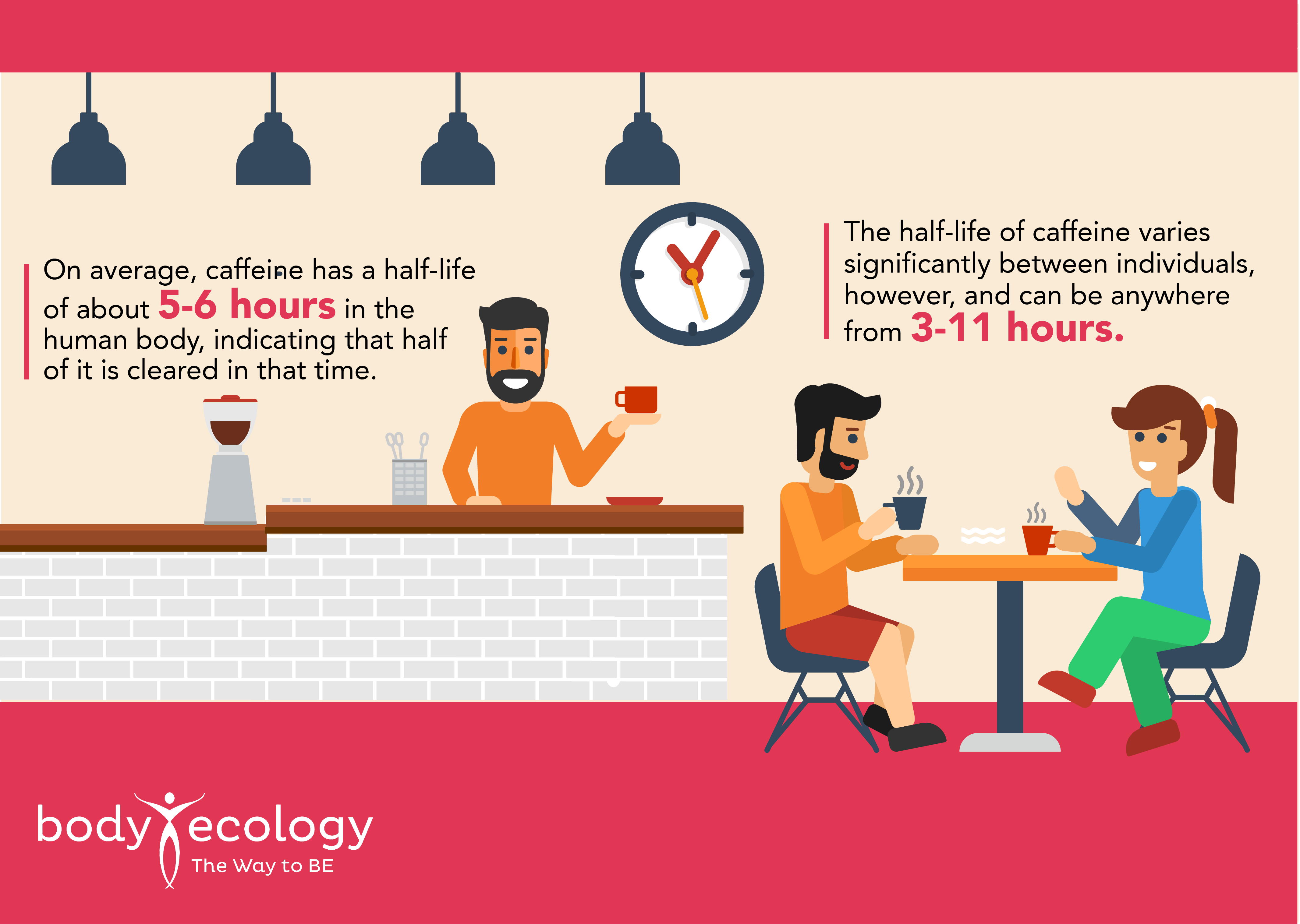 What’s more, after half the caffeine is cleared, the rest doesn’t clear anywhere near as quickly. The quarter-life of caffeine may be up to twice as long as its half-life; some people could have caffeine lingering in their system up to 22 hours after a single cup of coffee.

If your only cup of coffee is first thing in the morning, and you’re a slow metabolizer, there’s a strong chance you’ll still have some residual caffeine in your system by bedtime. If you also have coffee mid-morning, with lunch, or mid-afternoon, or if you drink multiple cups in the morning, there’s almost certainly going to be some significant effects on your sleep.

The neurotransmitter adenosine makes you sleepy. When you’re awake, adenosine gradually increases every hour, inhibiting wakefulness. During sleep, adenosine levels decrease until you feel sleepy, but caffeine inhibits adenosine, disturbing sleep by blocking the action of adenosine in the brain.

The effects of caffeine on sleep are mostly the result of caffeine binding to and blocking receptors called “adenosine” receptors. And even if you do manage to get to sleep, caffeine’s residual effects can make sleep less restful.9

Caffeine might also cause your body to pump out histamine

There’s not a lot of data on this, but many people with allergies and intolerances, as well as anxiety and sleeplessness, notice that coffee consumption can really make a difference in symptoms. This may be, in part, because caffeine appears to be a “histamine liberator.” This means that drinking coffee may prompt your immune system to release greater levels of histamine.10

There’s just one study, in rats, showing the effects of caffeine on histamine. This study found that histamine levels began rising significantly 30 minutes after caffeine consumption. Levels remained elevated for more than two hours (at least 140 minutes), with effects on neurons in the brain that could contribute to increased wakefulness and alertness.10

Histamine doesn’t just trigger sensitivities. It also acts as a neurostimulant and can increase feelings of anxiousness. Yet another mechanism by which caffeine may cause jitteriness.

If you’re having trouble sleeping, are feeling more anxious than usual, or are experiencing allergy and sensitivity symptoms, it might be worth looking at your recent coffee consumption. Even better, get your genome tested and see if you carry the slow or fast caffeine metabolism variants, or any variants of AHR or ADORA2A.

This can give you clues as to how well your body processes caffeine. It can also provide added motivation for kicking the habit, if needed, and opting for a breakfast beverage that works better for your body.