Should you skip coffee to heal your gut? This may surprise you.

One study says it’s good for you, the next says it’s bad. What’s the truth about coffee (other than it’s addictive, and we can’t seem to live without it)?

As research continues to evolve, there’s more and more support indicating that coffee is good for you — especially when you can personalize it. Switching to a natural sugar substitute, a non-dairy creamer alternative, or a low-acid roast are just a few examples.

Recent research has shown coffee has a positive impact on gut motility, and surprisingly, it’s not due to the caffeine content.

The average American drinks more than three cups of Joe a day, and consumption is up 5 percent from just a few years ago.2 With the billions of cups consumed each year in the U.S., it’s hard to imagine that we still rank behind several dozen other countries in our per capita intake.

Coffee can affect different people in different ways based on how their body metabolizes coffee and/or caffeine — and other considerations.3

A 2014 study in the journal Molecular Psychiatry discovered multiple genetic profiles among coffee drinkers and found that people naturally adjust their coffee habit to attain their desired effect from caffeine.4

According to this study, you should be listening to your body and monitoring how it reacts to caffeine, then decide if it’s right for you. The problem with this advice, though, is that coffee/caffeine is considered a drug and is addictive. 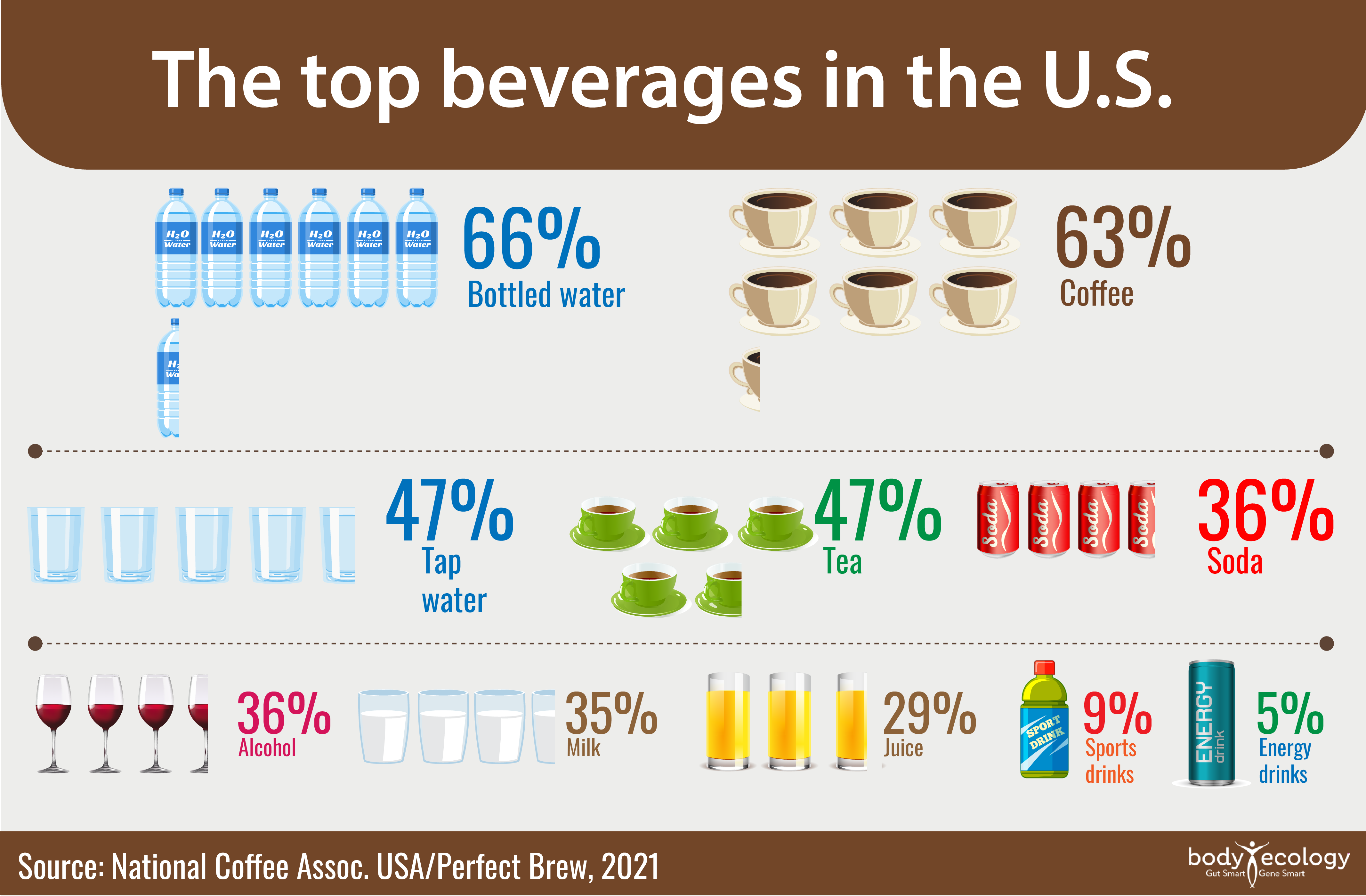 Coffee lifts our spirits and helps produce a positive, alert feeling by elevating dopamine. A significant clue that it’s addictive is that coffee elicits strong withdrawal symptoms — nausea, headaches, and fatigue — when you try to quit. Are you drinking coffee because you rely on it to help you go to the bathroom in the morning?

Keep reading to find out what this may mean for you.

Can drinking coffee help your digestion? It depends.

As research into the effects of drinking coffee continues, benefits still appear to outweigh the risks. However, if you or someone you love are dealing with health conditions that could be complicated by consuming coffee, it’s best to know the outcomes you may be exposed to.

Studies have been conducted showing the benefits of coffee consumption for lowering the risk of some cancers, stroke, and diabetes.5-7 Studies have found that coffee may even prevent the onset of Parkinson’s disease and other neurocognitive disorders.8

Coffee is most often celebrated for its antioxidant properties. It’s a good source of caffeine, of course, and bioactive compounds, such as polyphenols and carotenoids, that should make it an anti-aging superhero.

However, where can you also get polyphenols, carotenoids, and other important phytochemicals? Green shakes. Why would you want to get your polyphenols and carotenoids from a green smoothie when you can have a creamy, satisfying cup of coffee?

Because coffee may not be a good fit for everyone. 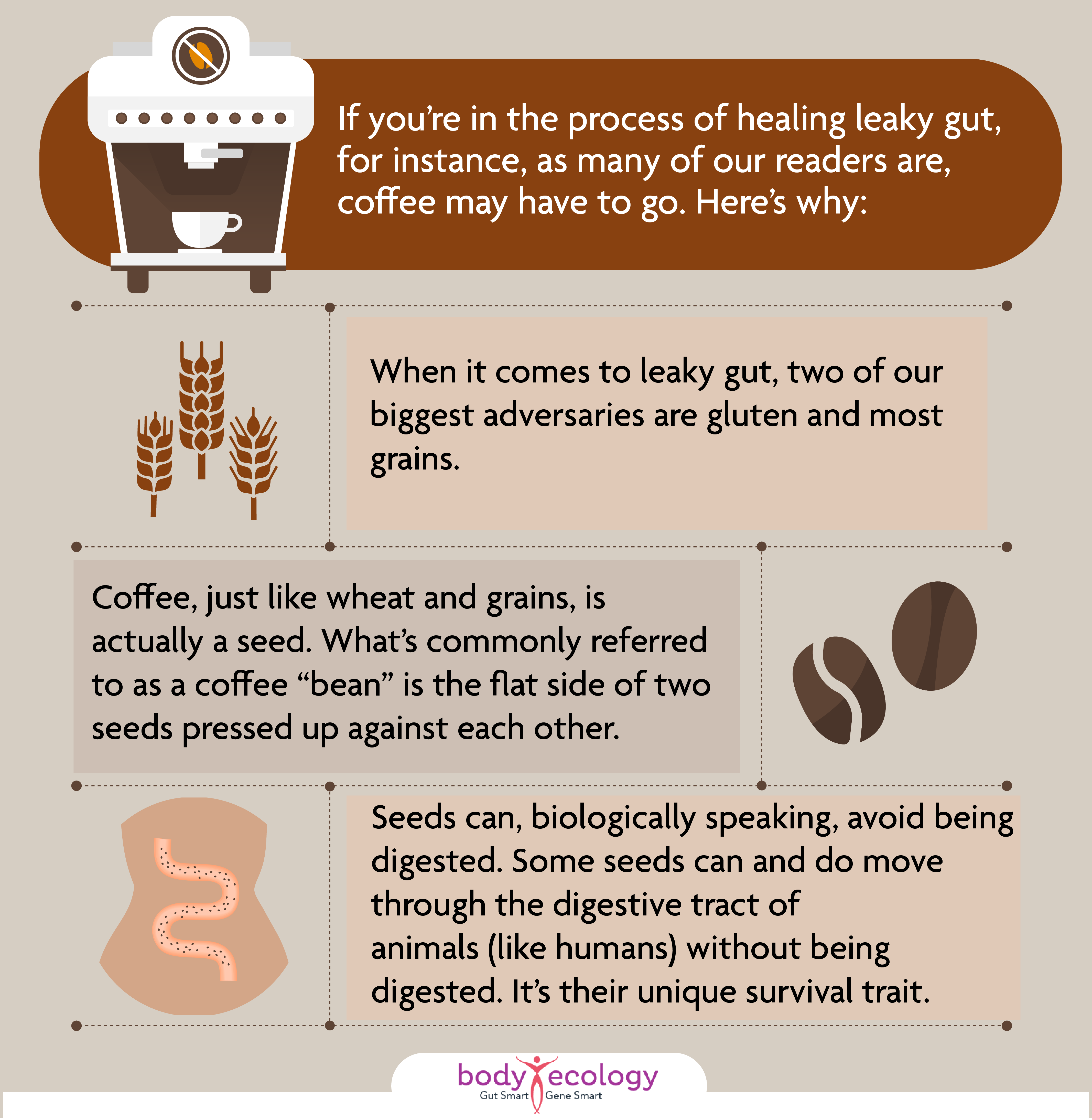 With coffee being a cousin of wheat and grains, it makes sense that it could behave similarly in your gut. Fortunately, coffee doesn’t have quite as strong a negative effect. But that isn’t the whole story.

Proteins found in coffee might be confused by the body with gluten, and when healing leaky gut, maintaining a gluten-free diet is essential to the recovery process.

Knowingly or unknowingly consuming cross-reactive foods that molecularly mimic the proteins found in gluten or gliadin, as well as foods that could potentially be contaminated by gluten, may cause symptoms in some people.

Researchers noted that some celiac patients who consistently follow a gluten-free diet yet exhibit symptoms associated with not following the diet could be reacting to antibodies that cross-react with non-gliadin foods, such as the ones listed above. They recommend the offending foods be treated as gluten-like peptides and be excluded from a patient’s diet when/if their gluten-free diet is not working.

Another strike involves coffee consumed after a meal:

Those that suffer from leaky gut, in particular, may be at risk for deficiency of minerals, like zinc, iron, calcium, and vitamin D. Certain B vitamins may be affected as well. Coffee may compound the problem by interfering with the absorption of some of the same vitamins and minerals.10,11

To help heal a leaky gut, it’s important to replete these deficiencies. Supplementing with a high-quality multivitamin and mineral product, such as Body Ecology’s Digestive Care Multi, can help ensure you’re getting all the nutrients your body needs, particularly while you’re healing.

In addition to supplying important major and trace minerals and vitamins, for those with Crohn’s, ulcerative colitis, or IBS, coffee should definitely be avoided. With leaky gut, avoiding coffee appears to be recommended as well.

If these issues aren’t a concern, you, like most coffee drinkers, may consume your brew in the morning soon after waking. Bowel movements are most likely to happen afterward — because, yes, the colon is waking up too.

The movement of food through the digestive tract is referred to as motility. Gut motility in a normally functioning GI tract can be influenced by many factors.

A 1998 study noted that in those analyzed (a very small group of twelve), drinking regular, caffeinated coffee promoted intestinal motility similar to that of ingesting food — significantly more than consuming water alone and 23-percent more than drinking decaf coffee.12

More recent research has shown coffee has a positive impact on gut motility, and surprisingly, it’s not due to the caffeine content.13 In vitro and in vivo research done on rats revealed that, independent of caffeine, coffee stimulates peristalsis in the intestines — to get “things” moving.

But how does coffee affect your microbiome? Click here to read part 2 of this article and get answers.