The Ideal Diet for Those with Celiac Disease and Gluten Sensitivity 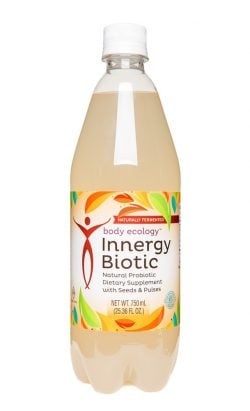 Are you still feeling unwell after going gluten-free? You only fixed a piece of the puzzle. To repair and heal, your gut needs daily support from a living probiotic rich in beneficial bacteria, like the refreshing Innergybiotic.

Did you know that celiac disease is possibly four times more common today than it was 50 years ago?

The Celiac Disease Diet: Gluten’s Got to Go

The US government estimates that as many as three million Americans – one percent of the population – have undiagnosed celiac disease, an autoimmune disorder triggered by gluten. Gluten is a protein found in barley, rye, spelt and, of course, wheat – a staple (and hidden ingredient) in most Western diets!

What’s even more staggering is that new research shows this spike in gluten sensitivity isn’t just due to increased diagnosis. A report published in the medical journal, Gastroenterology, suggests that environmental changes are to blame.1

Currently, celiac disease is diagnosed only after patients complain of symptoms and go to a doctor seeking treatment. But the study suggests that, “we may need to consider looking for celiac disease in the general population, more like we do in testing for cholesterol or blood pressure.”

Even worse, the researches documented an increased mortality rate for those with undiagnosed celiac disease. Dr Joseph Murray, the Mayo Clinic gastroenterologist who led the study, wrote that, “After following up on the people who were positive (for celiac disease), it looks as if they are almost four times as likely to have died within the thirty to forty years of follow-up as people who were negative.”

That’s pretty alarming. It proves just how serious celiac disease can be, and why it’s so important to treat it proactively for life-long health.

If you’re suffering from the symptoms of gluten sensitivity, you’ve come to the right place. The Body Ecology Diet just may be the perfect antidote for people with celiac disease, gluten sensitivity and other immune disorders. In fact, it was created especially for people like you!

Lack of digestive enzymes, a leaky gut, and an imbalance of healthy microflora (good bacteria and yeast) are all very common conditions related to celiac disease that can make symptoms even worse and lead to a host of other health problems.

Why have the healthy grain-loving microflora in our guts (which are in charge of digesting grains and gluten) gone missing? What are those environmental factors the study suggests are to blame?

From the 1950’s forward, our eating habits changed from fresh whole foods grown in the soil to packaged, pasteurized and processed foods. Certainly, the human body was not created or intended to eat the chemicals and preservatives in these foods.

This major change in our diet caused an assault on the good microflora.

Add that to the continually increasing levels of stress, medicinal and recreational drugs, pollution and environmental toxins we now deal with, and you’ll have an idea why the “good little bugs” or microflora died off.

They just couldn’t keep up with the assault.

This allowed the pathogenic bacteria and yeast to take over, setting the stage for weakened immunity, earlier aging, digestive pain, illness and disease.

The foods and principles of the Body Ecology system were created especially to restore your inner ecosystem, and do far more than just remove gluten from your diet. The first step to take to repopulate your gut with healthy microflora and end symptoms of gluten intollerance is to begin eating fermented foods and drinks.

Donna Gates, the founder of Body Ecology, brought our Body Ecology line of probiotic liquids into the diet to specifically help all of us have better digestive health. With certain of our probiotic liquids you can actually introduce glutinous grain-loving bacteria into your intestines safely, wait for them to multiply and become well colonized and then very slowly, Step By Step, start to add a small amount of a glutinous grain back into your diet. This has been true for thousands of people including children who have had autism.  Autistic children usually have severe gut issues and must initially avoid gluten and casein.

Donna herself was once extremely gluten intolerant. She laughs and says that if she wanted she “could now eat an entire loaf of sourdough bread and not feel exhausted and have the stuffy nose and swollen eyes” she once would have had.

However, flour products are not recommended on The Body Ecology Diet because cereals, pastas, loaf breads, cookies, pastries and other flour foods are not as healthy as the actual whole grain.  If you are going to eat wheat, rye, oats etc. purchase and soak the whole grain, then cook it for a long time until it is tender and easy to chew.  Try whole oats for example, they are even more delicious than oatmeal flakes. They are much more satisfying too.

Our 4 B.E.D. grain-like seeds: (quinoa, millet, buckwheat and amaranth) are not only non-glutinous they are also higher in protein and more alkaline.

But back to getting you over your gluten intolerance….

Here’s what we recommend you try if you are gluten intolerant:

There is no better way than the principles and probiotics recommended by the Body Ecology Diet to keep your immunity and digestive health strong. As research continues to prove the growing prevalence and severity of gluten issues in modern-day America, you should stop ignoring your feelings of stomach discomfort and fatigue.

Gluten-free alternatives to conventional grain products are wonderful, but they’re not likely to be the whole solution. By combining the principles of the gluten-free, sugar free and casein free Body Ecology Diet with probiotic-rich fermented foods and drinks, you’ll finally be able to enjoy pain-free digestion. The hundreds of thousands of people who follow the Body Ecology Way of life are enjoying better digestive health every day.