In the fourth of the ongoing “From The Tonic Bar” series of interviews with Body Ecology Diet success stories, Randall Zamcheck – Certified Body Ecologist and Health Coach in Los Angeles – interviews Celia Fox, age 30, who is currently finishing her new movie Days of Wrath.

How’d you get started on the Body Ecology Diet?

Really in the last year, I started to have a complete coffee and sugar diet. I was always drinking coffee and having creamer in it, but it became a bigger than life thing. It propelled to a different level and I found that I was having a lot of brown spots on my back and just stuff all over that I was like “oh god!” So when I tried to quit the coffee, I didn’t do it successfully. So I came to the Tonic Bar about three months ago wanting to talk about the Master Cleanse. Truth said it wasn’t the way to go.

Was that recommended to you?

Yeah, they claimed it helped skin problems, and this and that, and Truth said you really should try the Body Ecology Diet. I actually had the book, but I really didn’t open the book for a long time.

How come you hadn’t opened the book?

I bought it and read it for a little bit and was like “ok, great great great”, but I, you know, I heard of the candida theory and I heard this and I heard that, but it didn’t effect me, it didn’t speak to me that much. But when I came to the Tonic Bar and I saw people living this diet, and they had Body Ecology food, and all of a sudden the food tasted very good and it was rich. I wasn’t used to eating, you know, having a diet where there was butter or there was this or there was that.

How were you eating at the time?

It’s always extreme. So it was like raw food. Or raw food, then you binge out for a day. Then you go back. So it’s been this extreme thing. One for weight loss, to keep my weight low. Mostly it’s been about weight. Health second. The health didn’t necessarily start to go, but I saw effects of my lack of nutrition. It was more, I don’t really eat fast food, I don’t eat fried foods, it’s always under eat, under eat, under eat, and I wasn’t ready to let the sugar go. So what I started doing here is get a slew of herbs and minerals. Then get off the coffee and sugar and started drinking your drinks. Pretty much over night committed to the whole kind of lifestyle program. And probably in the last 3 months I’ve had coffee and sugar three times, maybe three times. The drinks at the bar have been a substitute for the coffee, filling that void.

Has it gotten better?

Now it’s been with the diet, all the brown spots are almost completely disappeared. My skin is pretty much clean in two months. That’s what I was first looking for. So for me, it was really like, I know these spots are liver spots, I know they’re toxic, I know this, blah blah blah. I know they can be cured through diet. So I didn’t go to a dermatologist, because I knew that it was just going to be b.s.. So then I cleaned those spots and then my face started to lighten too, because my face was starting to get brown. I just saw a whole shift in my body going brown.

And you noticed a difference right away?

This last week. Almost three months. This last week, there was a big brown circle on my back that disappeared. The middle of it disappeared then the rim of it disappeared. That’s been my first thing. I got to get that done first. Now I keep doing the detox, the coconut water kefir everyday, I do the probiotics, I do the minerals. The protein mixed with the vegetables. So the sardines or the fish. Really I stick with the fish and vegetables. No breads. No sugar. No candy. I slipped a couple times, but compared to what I was doing, which was every day all day, 3-4 times a day a 7-11 big gulp of, like the cappuccino, you know, and I just wouldn’t eat so my weight wouldn’t go up but my health was going down. But I’m still young so it wasn’t like totally deteriorated. And I train really hard. I train every day. Boxing and jump rope and things. But mostly, the biggest change, the biggest biggest biggest change is my emotional state. I was very prone to depression. Very prone to up and down behavior. Very very happy. Very very not happy. Not sleeping. Tossing and turning at night. And emotionally I am evened out for the first time. Like real evened out. I don’t get as upset, I don’t go to the depths of depression. I don’t react as hard. I sleep better. I’ve calmed down a lot. I’m a little bit more optimistic. I can turn a bad conversation, or someone coming to me, “oh blah blah blah blah blah”, I don’t go there as much. So emotionally I shifted HUGE. Someone could be like, “You know the economy’s bad, I don’t think your film’s gonna sell” and I’d spin out for like 3 days. And you don’t even look at who, it could be someone sitting right here at the bar. Or my employees that really don’t know what the $^%&$’s going on. I manifested more through anger. You know it was more a chip on my shoulder. That drove me more from a creative space. I think what this did was that it drove me back to a lighter creative space, which is why I got in the industry to begin with. I got in the industry to have fun and somewhere lost a little bit of that. This kind of got me happier in a lot of ways. Weight wise it’s just about the same, but I don’t really have a lot to lose. You know, but I’ve gained a lot more muscle and lost a lot of fat.

What do you find to be the hardest part about the diet?

Only the coffee in the morning. I just want to stop somewhere and get a cup of coffee with some sugar. On a daily basis I wasn’t eating bread, I wasn’t eating pasta, I wasn’t eating fried food, fast food, sodas. I am used to not eating as much and eating salads. Fried chicken would be bizarre to me. My diet was more of a soy chai latte. I want that sugar. It’s the sugar that calls to me more than the breads or the pastas. I was never eating that stuff on a daily basis anyway. On the job they’re always trying to give you food. Here’s some of this, here’s some of that. Let’s order lunch. And when I’m stressed I want to binge. I want to eat cookies. So that’s hard, but if I’m not around it, I won’t buy it. My boyfriend has to fend for himself.

Does he have a hard time with you on the diet?

No he’s used to it with me. He doesn’t care. He’ll eat whatever he likes. Junk food. 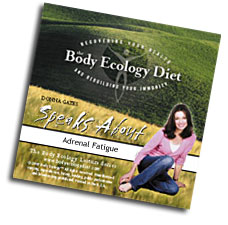 Make a few simple changes today to invest in YOUR adrenal health. For a comprehensive guide to nourishing your adrenals and boosting your energy, get your copy of the Adrenal Fatigue CD by Donna Gates.

What has helped you stick to the diet with all your sugar cravings?

This place. I like the energy and the knowledge and the hope. The hope for the future. The hope for change. Truth inspires me. You inspire me. You guys inspire me because of your dedication, your vision, and your feeling that the impossible is possible. That superior health, the next level health, the next level, faster, stronger, taller, wiser, this, that, is possible. I believe that. But I wanted to find a way to do it. Through these herbs and the diet, I’m getting stronger, faster, and look better. My skin’s a lot better. My eyes are brighter. I look at the physical first. The emotion’s big. People who work for me are used to me being cool but then raging out of control on something. Something will happen and I will lose my mind. And I can’t totally lose my mind because I’m a woman in the industry, but I don’t go there as much anymore.

*(always consult a trained herbalist or your physician)

RANDALL ZAMCHECK is a Certified Body Ecologist and Health Coach in Los Angeles. The Tonic Bar is a vortex of healing at Erewhon Natural Foods Market, blending the B.E.D. with Chinese Tonic Herbs, Superfoods, and whatever cutting edge tools they can get their hands on.

What would help you do the diet better?

If really there was food available. There really needs to be meals or somewhere we could get those meals. Or meals delivered. The meals you have here are bought up in a second.

Is there any advice you have for people just starting the diet?

Start with the herbs and the drink. They get you off of stuff. It’s a good transition. Seeing people who are doing it too. I had a soy chai latte like two weeks ago and instantly I was negative, depressed. There’s a lot of ways to be thin and a lot of ways to be in shape. I don’t look at this that way. I’m trying to change my cellular level, cleanse, and go to another level health-wise. So when I shoot a movie next year, I want to go in stronger and come out stronger.

Any advice for people on the diet already?

I think it’s about being around people who are doing it. It’s just trying stuff. I read it all the time now. And I think that now it makes more sense to me than when I bought it. I’m in it now. I get it. Yes, I’ve heard no sugar, no this, no that. Now I kind of really get how really depleting it is to the system. When you were explaining it the other day, and it stuck with me this morning because I wanted a cup of coffee, but you were like, you know, you’re in that accelerated state when you drink that stuff. Your adrenals can’t keep it up and get exhausted. I think it’s the knowledge, do you really want to put your adrenals through that? It’s just a taste. I’m not tired anymore. I’m taking all the herbs. I take all this stuff. So now it’s just the taste I’m craving. Now it’s not the caffeine anymore. So educate yourself and really understand what’s going on.