Is Gluten Linked to Depression?

Are you one of the nearly 16 million Americans who suffers from depression?1 How about one of the 27 million who takes an antidepressant?2

Gluten can inflame your gut and your brain.

What many people don’t know about their mental health is that diet and the inner landscape — or, ecosystem — of the gut are deciding factors in how good or how bad you feel. 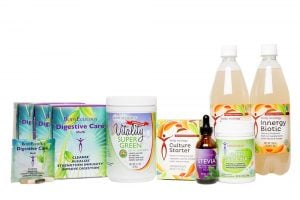 Could improving your gut health also improve your mental health? A gut-supporting program, like The Body Ecology Core Program, can help to rebuild a wounded gut, potentially easing inflammation in the brain associated with behavioral and mood disorders.

Dr. Michael Gershon, chairman of the department of anatomy and cell biology at Columbia University, helped to reveal that the gut and the brain are an interconnected network of nerve tissue. Together, they form the gut-brain axis.

There are other connections that the gut and the brain share. For example, while serotonin is mostly known as a brain chemical, cells lining the gut wall secrete large quantities of serotonin. Your digestive tract stores as much as 90 percent of your body’s total serotonin.4,5

Serotonin is the neurotransmitter that is responsible for feelings of confidence, wellbeing, and a sense of belonging. Serotonin also regulates movement in the intestines: Too little serotonin can slow down transit time and lead to constipation, while too much serotonin can speed up transit time and result in loose, watery stools. This is one reason why common antidepressants are often used to treat signs of irritable bowel syndrome.6,7

The gut-brain connection goes even deeper.

Following on the heels of Dr. Gershon’s groundbreaking discovery, Duke University researchers mapped the science of “gut feelings” in 2015. Plotting the newly understood cell-to-cell connection between the gut and the nervous system, researchers tracked in real-time the point when the brain recognizes it is full once food hits the gut.8 Based on this relationship, researchers from The Kavli Foundation suggested that gut microbes could be used to treat brain disorders, including anxiety, depression, and autism.9 Through the gut-brain axis, researchers have even linked poor microbial diversity in the digestive system to symptoms of anorexia nervosa.10

Gluten, Your Gut, and Your Brain

Maybe one day there will be a campaign that tells us, “This is your brain on gluten,” and we see an egg go up in flames. Because the reality is that gluten inflames the gut, and the inflammatory cascade doesn’t end there.11 For many people, inflammation in the gut translates to inflammation in the brain. This is one reason why inflammatory gut disorders are frequently accompanied by brain fog and migraine headaches.

Another sign of “fire in the brain” is behavioral and mood disorders, including depression.

In 2007, researchers in Finland published a paper looking into the relationship between dietary gluten and psychiatric disorders. While celiac disease and depression often occur together, a wide spectrum of people without celiac disease have developed an immune response to gluten.12 The question that researchers asked: Is this population more susceptible to things like cognitive impairment, depression, and anxiety?

Celiac disease is an autoimmune disorder. Those with celiac disease have an immune system that attacks the cells in their small intestine, destroying them. The trigger? Different proteins found in wheat and its relatives, and usually wheat gluten. There are no drugs to effectively treat celiac disease, but physicians do recommend a gluten-free diet. Further confirming how gluten can affect the gut and the brain in sequence, a 2014 study published in Alimentary Pharmacology & Therapeutics confirmed that a gluten-free diet could help to relieve brain fog, a common symptom in patients with celiac disease.13

Those with non-celiac gluten sensitivity have not been diagnosed with celiac disease — but their immune system does mount a response in the presence of gluten or other molecules found in wheat.  Indeed, an immune response to gluten and inflammation in the small intestine has been linked to depression in previous research.14,15

In other words, gluten can inflame your gut and your brain.

The microbes living in your digestive tract affect their local terrain. Like farmers tilling the soil, they either bring the ground to life or devastate it with toxic messages. Studies show that “good” probiotic microbes can stop inflammation in the gut, whereas “bad” pathogenic microbes can ignite inflammation, destroying tissue.

Because the gut and the brain are connected along the gut-brain axis, the effect of gastrointestinal microbes is far-reaching. Scientists at Acadia University suggest that “good” probiotic microbes may help manage signs of depression, anxiety, and other common mental health disorders.16

Zoe Hunter, lead author of the study, explains that, “There’s actual stress receptors in your gut…That’s the hypothesis; the probiotics actually change those receptors.” As far as the benefits of probiotic foods, Hunter says that, “Anxiety and depression, it goes along with so many issues. If you can give those individuals a natural product to go in place of a medication, it’s just more beneficial to take one less pill.”

In 2011, Dr. Javier Bravo and Professor John Cryan at the University College Cork, Ireland, showed in animal studies that probiotic bacteria reduce signs of depression and anxiety.17 Researchers also found that those on a probiotic diet had less of the stress hormone — corticosterone — floating around in their bloodstream.

Professor Cryan says that, “These findings highlight the important role that gut bacteria play in the bidirectional communication between the gut and the brain, the gut-brain axis.” He speculates that in the future, physicians may recommend probiotics to address stress-related disorders, like anxiety and depression.

Can Gluten Cause Depression?

Just how probiotic microbes benefit the brain is still unclear. Each year, scientists unearth new mechanisms behind the gut-brain axis. But, some things are clear:

Probiotics uplift the mood, while gluten drags it down.

If you struggle with depression, we recommend nurturing the digestive tract with a probiotic-rich diet that is gluten-free, sugar-free, and initially casein-free. The Body Ecology Diet has been designed to address the symptoms of a wounded inner ecosystem. Donna has created The Body Ecology Core Programs to improve digestion and elimination, conquer infection, enhance cleansing, support the gut lining, and repopulate beneficial bacteria in one fell swoop.

Your diet and your inner ecosystem have a direct impact on your mental health. Because of the gut-brain axis, the digestive tract is often referred to as the “second brain.” It should come as no surprise that the gut contains up to 90 percent of the body’s serotonin, a brain chemical that controls well-being, confidence, and feelings of belonging. Serotonin further regulates intestinal movement; serotonin imbalances can lead to constipation or loose stool.

The silver lining is this: Since the gut and the brain are connected, research supports beneficial probiotic bacteria to manage anxiety, depression, and other mental health issues. Probiotics affect mood for the better, while gluten may affect mood for the worse. If you are susceptible to depression, support your mental health with The Body Ecology Diet. The Body Ecology Core Programs are designed to heal the inner ecosystem with friendly bacteria that enhance overall well-being.

New To Body Ecology? Start HERE To Learn The 7...

Listen: Donna Gates Talks to Beth Lambert About the Compromised...