The brief history of Stevia: the healthiest sugar alternative 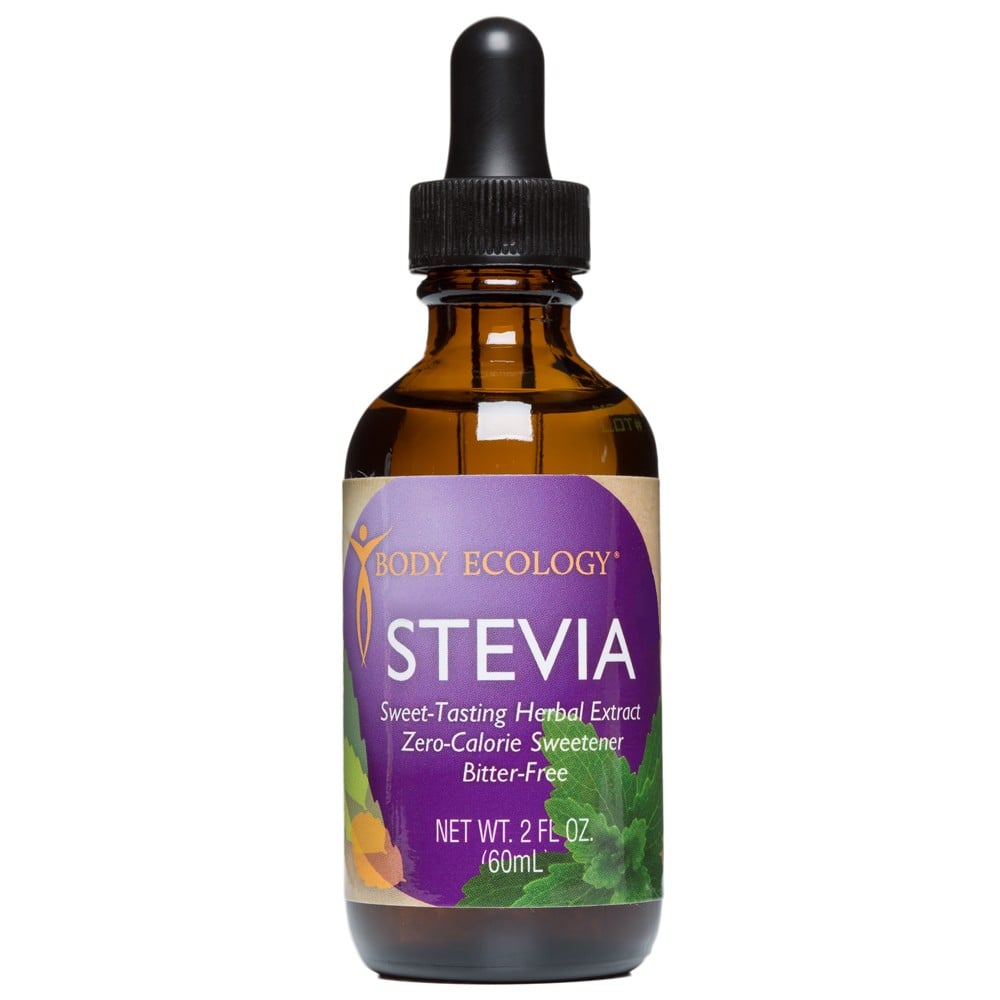 Stevia rebaudiana is a plant native to South America that is 200 to 300 times sweeter than sugar. Full of mystery and intrigue as a medicinal herb, stevia has emerged triumphant after a checkered past.

This delicious alternative to sugar and dangerous sugar substitutes not only tastes great, but is safe for diabetics and children who have ADD, ADHD and autism. Body Ecology’s Liquid Stevia Concentrate tastes better than ever with an exclusive filtering process!

What could we possibly have in common with the ancient Guarani people of Paraguay?

The Guarani are responsible for one of the best nutritional discoveries of recent centuries because just like us, they appreciated sweet tasting foods and drinks!

As many as 1500 years ago, the Guarani discovered a native plant with delicious green leaves that had an unbelievable sweetening power. When they chewed just a few leaves or added crushed leaves to hot mate’ (a bitter tea-like drink), the leaves sweetened the drinks…kind of like our modern-day sugar.

Gradually, they found that this sweet plant they called kaa he-he (which means “sweet herb”) had other uses besides its sugary taste.

Ancient history tells us that natives used this sweet plant for:1

The kaa he-he plant grew abundantly in South America and it wasn’t long before settlers from Europe discovered the plant and its amazing health benefits.

In 1887, an Italian named Dr. Moises Santiago Bertoni was the director of the College of Agriculture in Asuncion, Paraguay.

The Doctor heard his native guides describe a “very strange plant” that had some interesting qualities, but he had yet to locate the actual plant.

Finally, he received a packet of broken kaa he-he leaves from a mate’ plantation in the north and announced his “discovery” of the new species in a botanical journal. Bertoni named the plant Stevia Rebaudiana in honor of a chemist named Rebaudi who would later identify the plant’s sweetness component.

The very first crop of stevia, an entire ton of dried leaves, was harvested in 1908, but it wasn’t until 1931 that stevia became more commercially viable.

Now scientists and manufacturers had a potential alternative to sugar.

In the 1960’s, the Japanese government highly regulated chemical additives in their food supply. Once they discovered and established its safety, Japan became one of the first to use stevia on a large scale commercially.

Recognizing that stevia was a safer choice than aspartame and saccharin, by 1988 stevia had been added to ice cream, bread, candies, pickles, seafood, vegetables and soft drinks. By 1994 stevia reportedly comprised 41% of the sweet substances consumed in Japan!

Over the years the Japanese have conducted extensive studies to confirm stevia’s safety. Today stevia grows and is used in 10 other countries including China, Germany, Malaysia, Israel and South Korea.

Stevia in the United States: Great Taste and Great Health

How stevia became part of The Body Ecology System of Health and Healing is what I like to call a “divine arrangement.”

I had two friends at the Chinese Embassy who were responsible for imports into the US. I began asking them about the white powder produced for the Japanese in China and to my surprise they “gifted” me with a large shipment of an award-winning extract from a factory in Shanghai. I didn’t even ask for it.

One week later, as fate would have it, the FDA banned all imports of stevia into the US.

If you remember the timing, Monsanto was deeply into the sales of their newly-patented sweetener, Nutrasweet and Equal (asparatame). Calorie-free stevia powder…extracted from a natural herb…would surely become unwanted competition.

At first I was uncertain about what I should do. I felt strongly that this shown-to-be-safe herbal extract would be key to eliminating our dependence on sugar and improving the health of our country…especially our children’s.

Plus I had just self-published the first edition of The Body Ecology Diet book with an entire chapter on stevia. My intuition told me I must begin offering stevia to the many people who would benefit from it.

Since my book was originally written for those suffering from candidiasis, I knew avoidance of sugar in any form was essential, but I also knew you can’t just tell people to stop eating something they love, the sweet taste, and not offer a fairly close alternative.

Obviously stevia was meant to stay because soon three very bold and courageous doctors…Robert Atkins, Andrew Weil, and Julian Whittaker…began to write about it in the newsletters.

In fact, it was the sales from my book and this plain white extract that started Body Ecology on its path tohelping the world heal by changing the way we eat.

Two and a half years later, the ban was lifted; and shortly after that the FDA approved stevia as a dietary supplement. Tens of thousands of people right here in the US were now safely enjoying stevia and it quickly became a multi-million dollar business.

Today, we are happy to report that even Coca-cola and Pepsi have petitioned the FDA to change stevia’s status as a dietary supplement to a sweetener so they can use it in their soft drinks!

I’ve championed this natural sugar substitute for decades, and of course am pleased that through Coca-Cola, millions of people will soon learn about the benefits of this amazing plant.

But it is important to note the distinction between stevia, the green herbal powder, and the white stevia extract. The first is medicinal and the second is not. Because of its strong licorice-like aftertaste the green herb is not popular as a sweetener.

Here’s how people use stevia, the green herb, around the world:2

After hundreds of years of having only the crude green leaves, the modern world is now benefiting from the modern technology of extracting the two, sweet-tasting substances…rebaudiana and stevioside …from the leaves.

Stevia extract tastes great and is safe for us! It is so intensely sweet that a dozen drops of the diluted liquid made from the white powder is all you need to turn a sour lemon and water drink into delicious lemonade.

And Body Ecology’s Liquid Stevia Concentrate is the most convenient and best-tasting stevia you can find.

Easy to use for sweetening hot or cold drinks, your favorite foods and even desserts, Body Ecology Liquid Stevia Concentrate is one of nature’s greatest gifts.

I’m grateful that we have a safe sugar alternative for children. If you read this newsletter on a regular basis you will have noticed I have a special place in my heart for our children. Millions are struggling with obesity, diabetes, depression, hormone imbalances, ADD, ADHD and autism.

Now they, too, can enjoy sweet-tasting treats without the dangers of sugar. This is very important because most of the younger generations…from babies to teens…have an undiagnosed systemic yeast infection and viral issues as well. They must all totally eliminate sugar in any form from their diets while conquering these infections.

Find out why Body Ecology’s NEW Stevia Liquid Concentrate has less bitter aftertaste and more naturally delicious sweetness by reading: How to Choose Stevia: Why Can There Be Such Variation in Quality & What to Watch For.

Let Them Eat Cake! But Make it with Lakanto!

From Paraguay to China and back again, stevia has made its way to those who need it: anyone who wants to enjoy a sweet taste without compromising their health. But as great as it is, stevia has its limitations as well.

Baked goods made with stevia are flat and won’t brown. We’ve solved that problem too by offering you Body Ecology Lakanto, the delicious sugar substitute popular in Japan for over a decade.

Lakanto is a regular table-top sweetener in thousands of restaurants and is served in over ten thousand hospitals. Please take a closer look at Lakanto, especially when you need a cake for those special birthdays, weddings or holiday occasions … and try some today.

It’s my hope that more and more people will discover what the Guarani natives knew centuries ago: that some sweets can indeed be good for you.

If you’re a soda pop lover, you may want to check out the Q & A with Donna on Coca-cola and stevia.