Is this the delicious *new* sugar substitute you’ve been looking for?

Sugar. It’s one of the most addictive substances on earth and, clearly, something that should be consumed in small quantities — if at all.

Wouldn’t it be wonderful to enjoy something sweet from time to time and know that it isn’t damaging everything in your body, from your weight to your teeth to even your mental health?

Allulose is growing in popularity and may soon become known as the ideal sweetener since it doesn’t need to be metabolized by the body (and so does not raise blood sugar levels).1

Imagine a sweetener that doesn’t adversely affect health, isn’t full of chemicals, won’t give you gas, has been shown to be helpful for diabetes, and still provides the sweet taste that we all love.1 Sounds too good to be true, doesn’t it?

Amazingly, it exists. It’s called allulose, and it’s the new kid on the block. But Body Ecology’s new BE Sweet™ is special.

What is allulose? And what makes it healthy? 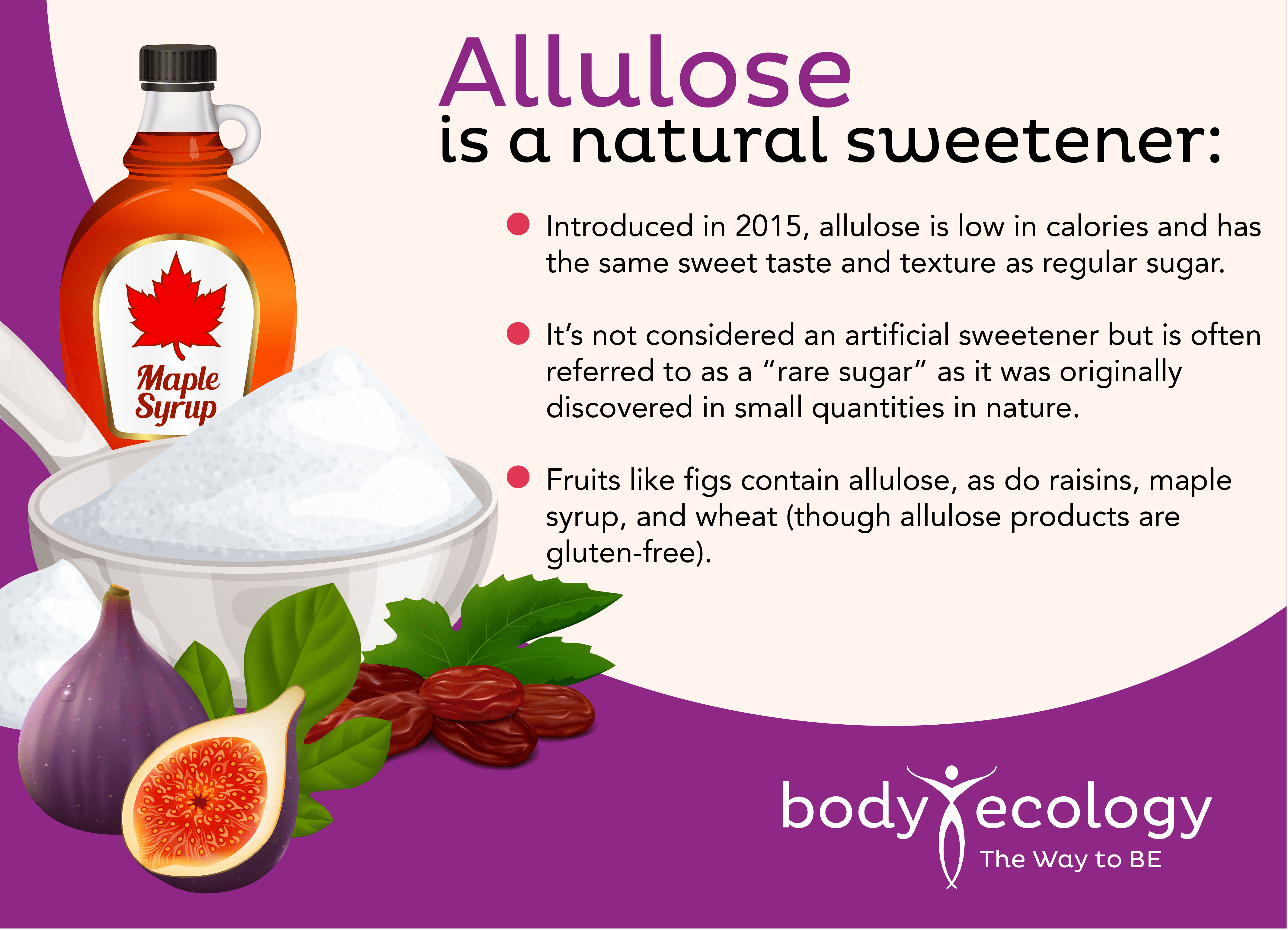 Allulose resembles a carbohydrate in its chemical structure. (It’s almost identical to fructose and glucose with slightly different hydrogen and oxygen structures.) It contains only a fraction of the calories of “real” sugar, has no bitter aftertaste, and doesn’t raise blood sugar levels.1

Allulose is commonly extracted from corn using a fermentation process, which we love! Now, if corn raises a red flag for you, it should.

Many commercial corn crops are genetically modified (also known as genetically modified organisms/GMO) and are commonly sprayed with the herbicide Roundup, which contains the chemical glyphosate. Glyphosate has links to many health problems — including certain cancers, such as non-Hodgkin’s lymphoma.2

But it’s important to do your research. There are also many healthy, “non-GMO” corn sources on the market from which allulose can be made. Body Ecology carefully chooses our supplier-partners and only works with those who we’ve vetted and can guarantee that their raw ingredients are derived from certified, non-GMO corn.

But why does BE Sweet™ taste so good? We experimented with different ratios of allulose, monk fruit, and stevia to create a perfectly delicious and safe sugar substitute.

Let’s live in a world where a sugar hangover is no longer a thing. Explore Body Ecology’s healthy sugar substitutes.

Allulose vs. table sugar: Which one should you pick?

Allulose is growing in popularity and may soon become known as the ideal sweetener since it doesn’t need to be metabolized by the body (and so does not raise blood sugar levels).1 It also tastes great and is useful in foods you prepare at home — like your morning coffee.

Allulose is starting to appear in packages in more and more grocery and health food stores, but with allulose, quality matters. Some processed foods, i.e., protein bars and other foods and beverages, contain various grades of allulose. It all depends on its processing and the quality of the corn in the allulose — which, in commercial foods, is often GMO. 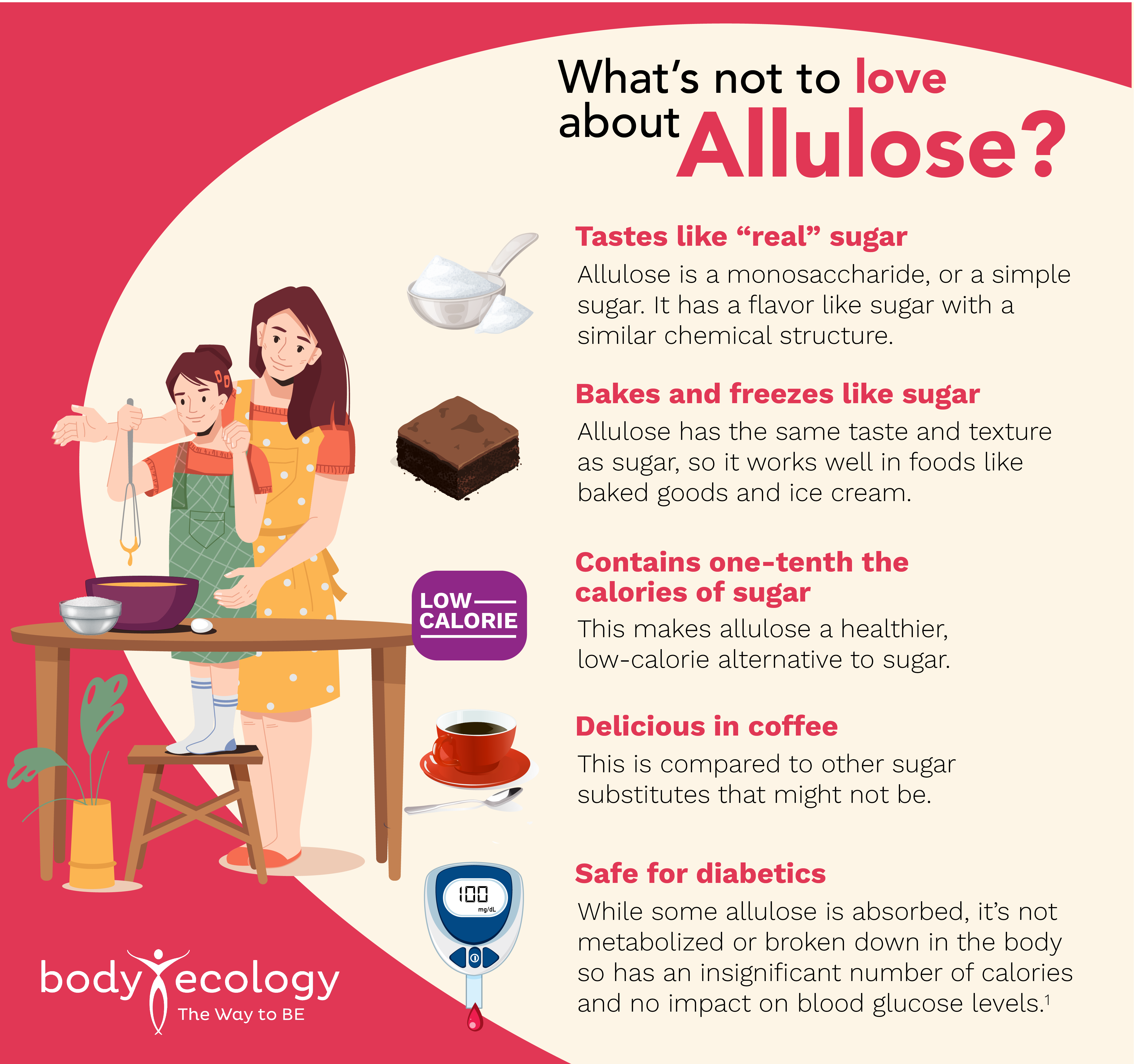 As its popularity continues to grow, you can find allulose in products on shelves in supermarkets and health food stores, but they won’t all taste the same. They have slightly different flavor profiles. Our new BE Sweet™ features a unique ratio of non-GMO allulose, monk fruit, and just a touch of stevia, which acts more like a flavor enhancer than a sweetener. There is no stevia aftertaste.

Based on comments from those who have tried BE Sweet™, we got the flavor profile just right.

Here’s what happens to your brain when you eat allulose

You may be familiar with artificial sweeteners, such as the blue, the yellow, and the pink (or, Equal, Splenda, and Sweet & Low). You may have heard that, though FDA approved, these sweeteners may not be so healthy.4

Cardiovascular concerns aside, artificial sweeteners have been thought to act as messengers in the brain, telling it that the sweet taste you experienced did not come with the expected intake of calories. In turn, this could, theoretically, cause your brain to signal cravings for even more sweet things.

But do rare sugars have the same effect?

A recent study investigated the effects of different nutritive and non-nutritive sweeteners (those that contribute calories — and those that do not) on brain neuron activity and network connectivity.8

The study measured changes in neuron activity and analyzed the immediate effects of ingested nutrients on areas and networks within the brain that involved feeding “behavior” and energy balance. This included areas of the brain shown to be altered in obesity, feeding behavior, and reward and areas involved in decision-making and impulse control.

The hypothesis was that naturally-occurring sugars containing caloric, or nutritive value (glucose and fructose), would elicit a response from the brain. However, consuming a non-nutritive sweetener like sucralose (a.k.a. Splenda) would not elicit a response due to its lack of calorie content.

The conclusion drawn from this study was that:

Here are more details of this useful study:

The amount of sweetener in each shake had the sweetness, consistency, and macronutrients similar to those found in milkshakes available at fast-food chains. Brain measurements taken before and after the shakes were ingested looked at neuronal activity and effect on feeding behavior.

This is what they found:

This study confirmed that rapidly absorbed glucose provides important signaling to regulate response to foods and their effect on the body. Here, brain activity was reduced after ingesting the glucose shakes in the regions of the brain that were seeking reward or energy when in a fasted state.

Glucose in the shake led to a significant increase in connectivity in parts of the brain involved in feeding behavior, reward centers, emotions, and decision-making.

Ingestion of the fructose-sweetened shake had various effects on brain function, with a lack of a decrease in activity suggesting fructose might not have a stabilizing and satisfying effect. This may impact feeding behavior — and cravings.

The low- and non-nutritive sweeteners allulose and sucralose, respectively, had little-to-no effect on the functional brain responses measured. Researchers noted that sweet taste without energy (calorie) content does not lead to a lasting decrease in brain messaging or activity.

In a nutshell: Different types of sweeteners can trigger different responses in the brain, which may affect your eating habits. Nutritive sweeteners (containing calories) elicit a reaction from the brain that could have effects on feeding behavior and reward.

Since non-nutritive sweeteners elicit little-to-no effect, they may not impact feeding behavior positively or negatively. When it comes to regulating energy balance and cravings, which may contribute to weight gain, low-nutritive sweeteners, like allulose, could be healthier substitutes for high-calorie sweeteners.