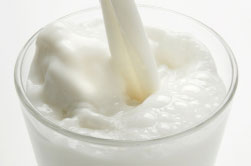 It’s time to find out the truth behind the great milk debate!Does milk really do your body good? Learn more about the different types of milk to make the healthiest and safest choice for your family!

Perhaps one of the most controversial dietary topics amongst whole foodies today, aside from grain, is cow’s milk.

On one hand, there are the die-heart supporters – the Weston Price, Sally Fallon, and Tom Cowan followers who consider raw milk a curative for a host of ailments, from allergies to heart disease. On the other, there are those that say milk, regardless of it being raw, is not meant for human consumption. These folks point out that human beings are the only mammals that still consume milk after infancy, and the digestive characteristics of a calf are very different than that of a human’s, hence not an appropriate fit.

Those who advocate drinking raw milk are also in contention with supporters of pasteurization.

Within pasteurized varieties, one finds consumers of both commercial and commercial organic milk. And more recently, a debate is growing amongst the raw milk community over A1 and A2 cows. Then there are those that prefer to drink only kefir milk.

Cows fed GMO grain, pumped up with antibiotics and hormones, and kept in subpar, inhumane conditions produce commercial milk that is by far the easiest variety to consider unhealthy for consumption. That this milk is devoid of nutrients is one factor; however, many whole food activists and nutritionists consider it actually to be harmful to one’s health.

What’s more is that it lacks any of its original, fresh creamy taste that was the stamp of cows milk when it first was discovered as a consumable, and some who are accustomed to fresh farmed raw milk say they can even taste the chemicals in commercial milk. Finally, the milk is put through the controversial processes of pasteurization and often, homogenization.

With little taste or nutrient value and imbued with unhealthy additives, one might readily avoid this variety, let alone question the very point of consuming it.

next article >
GET 15% OFF YOUR FIRST ORDER!