Why You Should Avoid Gluten If You Have Candida Overgrowth

Candida overgrowth may begin in the gut. But it doesn’t end there. Candida can spread beyond the gut wall and throughout the body.

The combination of Candida overgrowth and gluten is a dangerous one. 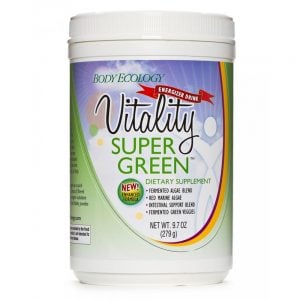 When gluten meets Candida, it can have a disastrous effect on the body. Living gluten-free and healing the damaged lining of the gut is critical, with support from nourishing superfood supplements like Vitality SuperGreen.

Like a weed that will take over your whole yard if you let it, Candida is opportunistic and will grow rapidly when it has the chance. And just like those pesky weeds, Candida is tough to get rid of. It can crawl through tissue or hide undetected from the immune system.

Many of us have no idea that we already suffer from Candida overgrowth.

Sore joints, skin problems that never seem to go away, exhaustion, and brain fog after eating may all be signs of hidden Candida overgrowth.

When gluten partners up with Candida, the effects on the body can be devastating.

Gluten Destroys the Lining of the Gut

The proteins in gluten are pro-inflammatory and can damage the lining of the gut.

In fact, research has found that gluten protein fragments can destroy the bond between cells lining the intestinal wall. (1)(2) This bond is like the cement that holds bricks—or cells—together. The bond between intestinal cells is what prevents large food particles from leaking into the bloodstream. (3)

Gluten destroys this bond and makes the gut leaky.

A “leaky gut,” or deterioration of the wall, can be triggered by gluten. Whether or not this happens depends on if we were exposed to gluten within our first year. (4) It also depends on the balance of “good” and “bad” bacteria in the gut.

The inner ecosystem of your gut is a complex web that is made up of bacteria, yeast, enzymes, neurochemicals, gut lining, and cells belonging to your immune system. When the lining of the gut is leaky, it lets in large particles of food. For example, this could be fragments of proteins that make up wheat gluten.

Simple exposure to gluten is not enough.

Without this “siren,” exposure to wheat gluten may promote tolerance. This means that instead of triggering gluten sensitivity, the fragment of wheat gluten will actually trigger flexibility. (5)(6)

What does it mean if you know that you are sensitive to gluten—or that you feel better when you remove it from your diet completely? If you have sensitivity to gluten, at some point in your life you may have eaten gluten when there was a pre-existing infection or when your inner ecology was out of balance.

Remember, the immune system first needs a warning signal before reacting to any large food particle it comes into contact with. Candida overgrowth, bacterial overgrowth, and inflammation along the intestinal wall all tell the body to release this warning signal.

The combination of Candida overgrowth and gluten is a dangerous one.

On their own, both gluten and Candida can damage the lining of the gut. With the help of Candida, gluten can activate the immune system and establish a lifelong sensitivity to gluten—no matter how old you are.

If this is not enough to worry about, some researchers believe that all autoimmune disease begins in the gut. (7)

In the case of autoimmunity, the immune system attacks and kills cells that belong to the body. What results is inflammation. Over time, this inflammation leads to destruction of tissue, and it can be deadly.

As it turns out, other common autoimmune diseases may begin with leaky gut. (8)(9) For example:

Other ways to increase the risk of leaky gut include:

It is essential then to nourish the good bacteria in the gut with specific strains of beneficial bacteria and yeast found in fermented vegetables and probiotic liquids, as well as to heal the gut lining with covalent bonded glutamine found in Vitality SuperGreen.

Remember, healing a wounded inner ecology and sealing the lining of the gut means more than a gluten-free diet. It also means adopting a lifestyle that supports your physical and mental health.

Candida overgrowth starts in the gut and can quickly run rampant throughout the entire body. If you suffer from chronic skin issues, exhaustion, and sore joints without reason, you could have undetected Candida overgrowth.

Unfortunately, gluten can break down the gut lining to make it leaky. Candida overgrowth can further contribute to gluten sensitivity. This combination can quickly become dangerous.

Gluten sensitivity caused by Candida overgrowth can activate the immune system. It could even trigger an autoimmune disease like Celiac disease that can only be treated with a 100% gluten-free diet. Leaky gut may be further aggravated by antibiotic use, drinking alcohol, stress, or anxiety.

While a gluten-free diet may provide some relief, it is only one piece of the puzzle. It’s critical to nourish the gut with friendly bacteria in fermented vegetables and probiotic liquids and to heal the gut with covalent bonded glutamine in Vitality SuperGreen.