Runny nose and allergies? You might need to watch your salicylates.

Content reviewed by Donna Gates
Written by Body Ecology on May 27th, 2021

Have you ever had a facial or used a beauty product containing salicylic acid? It’s become a common ingredient in many skin care products. Used to remove debris from the skin that can clog pores, it’s also advertised to help with dry, scaly skin conditions.

So, what’s it doing in your food?

What’s salicylic acid? And could you be intolerant?

Salicylate is a chemical, salt, or ester of salicylic acid. Salicylate extracts have been used medicinally for hundreds — perhaps, thousands — of years.

They’re naturally occurring in some plants (i.e., white willow bark and wintergreen leaves) and are thought to protect the plant (including fruits, vegetables, spices, and others) from insect damage and disease.1

If you’ve discovered you’re salicylate intolerant, it means you probably have difficulty properly metabolizing and excreting salicylates from your body. Salicylate intolerance has been known for more than 100 years but has yet to be studied extensively. 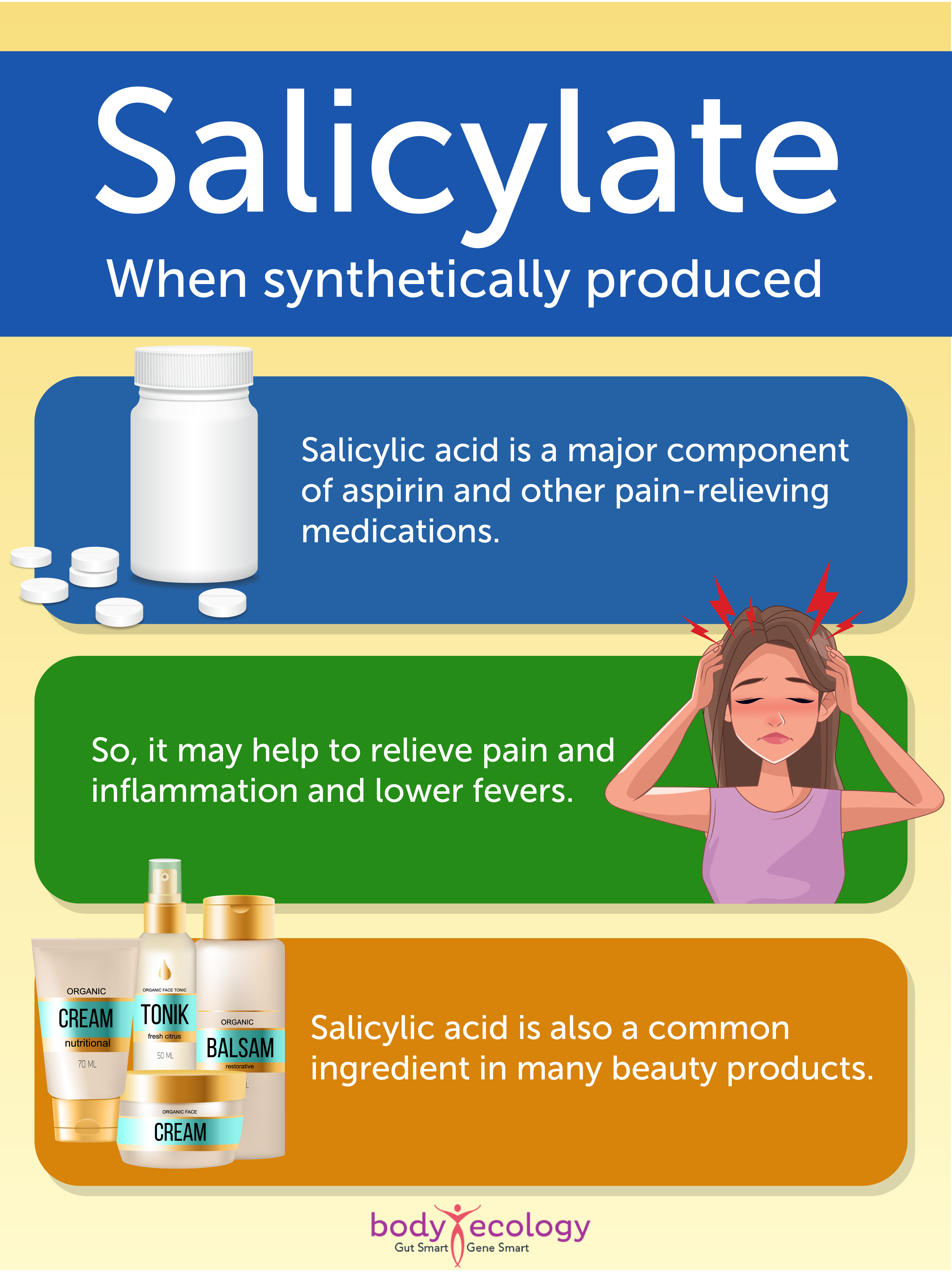 What about salicylates in food? Are they friend or foe?

Vegetarians — who, compared with those on a mixed diet, consume greater amounts of fruits, vegetables, spices, and certain beverages — may have naturally higher levels of salicylates. This might contribute to the positive impact of vegetarianism on, for example, cardiovascular health.

High fruit and vegetable consumption greatly contributes to a healthy lifestyle, and there’s also strong evidence that micronutrients and other components of fruits and vegetables have nutritive effects, such as higher amounts of antioxidants, B vitamins, minerals, and fiber.2 Furthermore, research now shows that increased intake of salicylates may be another benefit of eating fruits and vegetables.3

Salicylates, however, can cause health problems for some people:

Blood tests are sometimes given in a hospital setting to determine salicylate intoxication, if a patient is suspected of having an overdose of aspirin. Such tests involve analyzing the immune cells in the blood to evaluate how they respond to salicylates.

For general sensitivity, simply avoiding salicylates is recommended and then gradually reintroducing lower-to-higher levels of salicylates over time (known as an “elimination challenge”). Salicylate tolerance can often be achieved by gradually adding back in ever-increasing amounts of salicylic acid until a tolerance can be realized — over about a 10-month period.

Get your gut health back on track. Starting now.

So, what’s behind your salicylate sensitivity?

If a natural substance causes symptoms that do not involve the immune system, it’s not considered an allergy or a side effect but, rather, an intolerance or sensitivity.5 That said, in severe cases, a salicylate allergy can lead to anaphylaxis, a life-threatening reaction, though such severe reactions are quite rare.

People with gut issues, such as yeast or bacterial overgrowth, or digestive diseases (and the accompanying inflammation) can develop salicylate intolerance as a result of leaky gut syndrome. With leaky gut, intestinal permeability is abnormally increased, opening the tight junctions that make up the lining of the intestinal tract and “leaking” undigested food particles into the bloodstream.

The body then develops antibodies to many of these foods. Intolerance to salicylates may often occur rapidly when leaky gut is present, exacerbating inflammation.6

Generally speaking, disturbances in the gut are closely tied to skin conditions.7 While there are no studies demonstrating a causal relationship between consuming salicylates and eczema, many experts advise those with eczema to avoid salicylates — especially foods with high salicylate levels.

What’s a salicylic diet? It’s simply one that seeks to avoid foods high in salicylic acid.

Anyone with a salicylate intolerance can benefit from supporting the gut in ways that lower inflammation. Targeting the elimination of specific, harmful bacteria, while leaving beneficial microbes to flourish, can be especially helpful.

Incorporate foods that promote the proliferation of healthy bacteria, including some fermented foods and the prebiotics that provide their food source. Make sure to check labels for the lowest salicylate options. These are excellent choices for people following low salicylate diets and may help heal the gut at the same time.

There are also some supplements that may help:

Remember, gut health is the foundation of your overall health. With time and patience — and a healthy gut — salicylate sensitivity can be managed.