Are any of these symptoms familiar?

These are the most common symptoms of celiac disease.

The more damaged intestinal tissue is, the more you will need to limit your diet.

When You See Signs of Celiac Disease, Pay Attention

Celiac disease is more common than you think.

The last four decades have seen a drastic increase in the number of celiac cases per year. In recent years, it is not uncommon to find markets and even restaurants advertising gluten-free options. 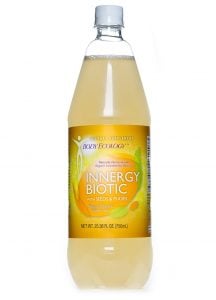 Even something as small as constant headaches or fatigue could be a common symptom of celiac disease. You can protect your body from the damage by calming the inflammatory response — heal the gut and regulate the immune system with a daily probiotic like InnergyBiotic.

Studies point out that:

There is no medical cure for celiac disease — a gluten-free diet is the only “prescribed” treatment available.

With stats like these, it is important to ask questions! Celiac disease is a gateway disease. In other words, the chronic inflammation and gut permeability pave the way for other serious conditions to arise.

What exactly is celiac disease?

It is possible that, at first, symptoms of celiac disease may not be apparent:

While this uncomfortable feeling can persist for hours, you may just chalk it up to “something you ate.” Because these digestive issues happen frequently, you also may think that you have “weak digestion” and forget about it. Over time, the systemic effects may prompt you to seek a doctor.

Taking the Right Steps Before Diagnosis

Because poor digestion can seem like a minor thing, it may take a while to get a diagnosis. After symptoms present, the average diagnosis in the U.S. takes roughly four years. Sometimes, it can take as long as ten years. With each undiagnosed year that passes, the risk of developing other autoimmune disorders, osteoporosis, neurological issues, and cancer increases.2

This diagnosis frustration is nothing new to anyone who has experienced symptoms of the disease. CBS Denver reports that even for children showing signs of extreme digestive distress after eating gluten, a celiac diagnosis is hard to come by. It’s normal to see doctor after doctor before a diagnosis is confirmed.3 Because symptoms vary so greatly from one person to the next, a patient in distress may be bounced around to different specialists, undergoing dozens of tests, before receiving any concrete answers. Writing for Today’s Dietitian, registered dietitian Judith C. Thalheimer calls the condition “silent celiac disease” for this reason, emphasizing how difficult it is to get a diagnosis when subtle symptoms appear.4

Additionally, a diagnosis is made at the far end of the disease spectrum. In other words — when it’s too late:

Wheat gluten, which is a protein, is most attributed to wheat sensitivity. However, the body can react to any molecule in wheat:

A simple rule of thumb: If your body shows any reaction to a food or drink, in the digestive tract or elsewhere, do not consume it. Many antibody tests that screen for autoimmunity and allergies are still in the process of being developed!5 Keeping a food diary can help you determine which foods your body reacts to.

Why are rates of celiac disease rising so dramatically? Doctors and researchers cannot yet tell us why.

What we do know is that modern food processing has changed the nature of wheat and other grains, making them far more toxic than they ever have been. For example, deamination is a modern food processing technique that alters the structure of wheat and makes it far more troublesome to our immune system. Theoretical and Applied Genetics researchers believe that modern wheat breeding has contributed to our noticeably higher rates of the disease.6

Some suggest that modern society is far “too clean.”

We are exposed to fewer diseases, and our immune systems are weaker for it. This is called the hygiene hypothesis:

While we would like to think that living in an industrialized, modern society has given us some control over the microbial population living in our bodies, it is safe to say that “too clean” only supports the genesis of new, smarter bugs, rather than fewer bugs.

Industrialized microbes and modern birth methods, such as Caesarean section (C-section) can drastically affect what types of microbes populate the gut. This is because in a C-section, the infant does not pass through the vaginal tract and misses out on all of mom’s native bacteria. Instead, whatever bacteria happen to be floating around in the environment and on peoples’ skin will populate the newborn’s gut. A number of immune-related disorders have been associated with C-section birth.9,10,11

Getting the Right Bacteria into the Gut

Inoculating the gut with beneficial bacteria can heal the lining of the gut and support a healthy immune response.

Eating for health actually feels good. The more damaged intestinal tissue is, the more you will need to limit your diet. In fact, this is why millions of people without celiac disease choose to go gluten-free — to avoid this common irritant known to compromise health. Many people without the disease associate eating gluten with fatigue and poor health. The Body Ecology Diet recommends completely avoiding pro-inflammatory gluten proteins that can damage the lining of the gut.

By turning down the inflammatory response in your body, healing the gut, and regulating the immune system, you can actually halt the progressive degeneration associated with celiac disease:

Celiac disease is more common than many people realize, and rates have risen dramatically in the past four decades. Roughly one in 100 Americans is affected by celiac disease, which can lead to dementia, osteoporosis, and other serious autoimmune disorders if left untreated.

Here are six signs that you could be suffering from celiac disease:

Celiac disease can be devastating to the body, but there is something you can do about it. The Body Ecology Diet recommends completely avoiding gluten-rich grains that can trigger an immune response.

It’s also critical to heal the gut and regulate the immune system to turn down the inflammatory response associated with degenerative disease: