The AAP recommends iron-fortified foods for babies: Is it really safe?

The American Academy of Pediatricians (AAP) advises doctors to recommend that parents feed their baby iron-fortified formula and iron-fortified cereal between the ages of 6 to 24 months old.1 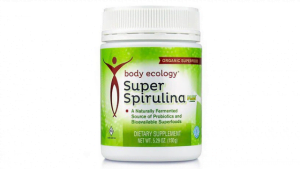 Because it’s fermented, Super Spirulina Plus is naturally rich in easy-to-digest vitamins and minerals: This includes iron. Use it as a gut-friendly supplement for babies starting solids, toddlers, children, and grown-ups.

If you exclusively breastfeed your child, then it’s recommended that you begin giving your baby iron supplementation in the form of liquid drops at the age of 4 months.

The American Academy of Pediatricians recommends this because breast milk is naturally low in iron. Breast milk also contains iron chelators, which bind to iron and reduce even further the amount of free iron available to your baby.

FACT: Iron supplementation may damage the inner ecology of the body.

As it turns out, research shows that iron-rich foods for babies may promote the growth of intestinal bugs.2 Not only that, but the consumption of iron-fortified foods during infancy may alter the environment of the gut and affect overall immune function.3

The AAP recommends iron supplementation. However, if you do a little digging, you’ll find that they also tell us that:

E. coli is a bug that is naturally present in the gut. Under the right conditions, it can quickly grow out of control and become pathogenic. An iron-rich environment in the gut helps to set up an ideal breeding place for opportunistic bacteria, like E. coli.

Iron-rich foods for babies may make a bad infection worse.

Even the body knows that iron levels play a big role in bacterial infection. Iron plays such an important role that during an infection, the body will literally make extra effort to stow away any free iron. This process, called iron withholding, happens in response to any kind of infection.

The body tucks away as much free iron as it can because bad bacteria love iron and need it to thrive, just like we do. This means that if there is more iron in the gut, whether from iron drops or fortified baby food, this could actually help to promote the growth of pathogenic bacteria.

During the first few days of life, an infant’s gut is entirely permeable, and this is what nature intended. Newborns have naturally permeable guts in order to educate the immune system, which largely sits just beneath the intestinal tract. In fact, an infant’s gut may not seal completely for several weeks after birth. This is why breast milk plays such a critical role in helping prevent immune-related diseases.

Breast milk educates the child’s immune system, while also prompting the gut to seal at a normal rate. Formula-fed infants not only house a higher percentage of opportunistic and pathogenic bacteria, like E. coli, but it also takes a longer amount of time for the gut to close completely.

Got questions about how to naturally support your family’s health? Reach out and schedule a one-on-one consultation.

When it comes to iron-rich foods for babies, did you know that?

When a child consumes iron-fortified foods and only absorbs 5 percent iron, this leaves a large percentage of iron in the gut. Pathogenic bugs in the gut need iron as much as we do, and this extra iron will actually feed gut infection.

Nature has an intelligence beyond the education and research of medical doctors. In infants, the body naturally limits the amount of iron that it has access to.

Delayed cord clamping — another natural, intuitive practice — has also been shown to help prevent newborn iron deficiency by the time a baby is 4 months old.11,12

This doesn’t mean that a baby’s first foods can’t be iron-rich. But in spite of popular recommendations, iron-fortified grains and cereal can do more harm than good. Besides the fact that we absorb far less iron from fortified foods, both grains and cereals contain proteins that commonly irritate the lining of the gut. This exposes the body to potential immune disorders and gut infection.

If your baby has moved onto solids, choose iron-rich foods for babies that naturally fortify the diet.

An excellent source of iron for toddlers and adults alike is Body Ecology’s Super Spirulina Plus:

Keep in mind that in many traditional practices, a baby’s very first food is liver or egg yolk, both of which are high in iron. When choosing your child’s first foods, avoid iron-fortified grains and cereals. Instead, experiment with foods that are already rich in iron, as nature intended.