Improve Brain Health and Performance with This Surprising Superfood

In 2009, a team of scientists teamed up with the National Education Departments of Dakar to see if they could improve the nutritional status of school-aged children in Senegal.1

Spirulina may safeguard against toxicity, stress, and degeneration in the brain.

In the study, a total of 549 children took 2 grams of Spirulina for 60 days. Within just two months, students performed better in school while taking Spirulina. 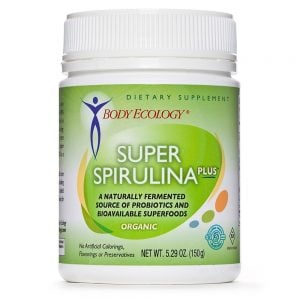 If you’re looking for a powerful dose of polyunsaturated fatty acids, polysaccharides, vitamins, minerals, and protein, look no further than fermented Spirulina, found in Super Spirulina Plus. Fermented Spirulina can even help to protect the brain against degenerative diseases, like Alzheimer’s and Parkinson’s.

Spirulina is a blue-green alga that thrives in both fresh and salt water. It is roughly 62 percent protein in dry weight. Besides containing a formidable amount of protein, Spirulina is also a complete protein containing essential amino acids.2

Along with protein, Spirulina is a storehouse of bioactive molecules, such as:

With such a wide array of benefits, Spirulina fits the bill as a superfood. It could even be called Mother Nature’s multivitamin. Perhaps it comes as no surprise that children performed better on exams with the addition of Spirulina to their diet. In 2015, aid workers in the capital of the Central African Republic continued these relief efforts, providing sardines and Spirulina as a food supplement to impoverished children. “It’s the ideal food for malnourished children, along with sardines,” said Spirulina producer André Freddy Lemonier.3

In animal studies, researchers have found that Spirulina may protect the brain from damage and degenerative diseases, like Parkinson’s disease and Alzheimer’s disease.4 University of Madrid researchers called Spirulina a “powerful antioxidant” that was capable of interfering with cell death caused by free radical damage. The researchers suggested that Spirulina extract could be useful in some treatments for neurodegenerative disorders — since Spirulina helped to increase levels of the body’s most important antioxidant, glutathione.

In other research, the antioxidant effect of Spirulina was more pronounced than other natural antioxidants, like blueberry or green tea.5 Spirulina is also an excellent source of omega-3 fats, which offer another way to protect against oxidative stress. Omega-3 fats boost cognitive performance too. In recent research out of the UK, children with low levels of omega-3 fatty acids were more likely to perform poorly in school and have behavioral problems.6

Researchers at the Defence Institute of Physiology and Allied Sciences in Delhi, India, found that Spirulina may safeguard against toxicity, stress, and degeneration in the brain.7 Other studies show that Spirulina has the ability to scavenge free radicals, restore levels of antioxidants, and chelate toxic heavy metals.8,9

Compared to ordinary green tea, Matcha Green Tea contains 137 times more antioxidants — which, as we saw in the Spirulina research, may offer some brain protection against degenerative disease. And as a source of the amino acid L-theanine, Matcha Green Tea can affect the brain for the better, by increasing feel-good brain chemicals and promoting balanced brain waves to create a state of “wakeful relaxation.”10,11

As with most raw foods, when Spirulina is fermented and pre-digested, it is more biochemically active in the body.

For example, a study published in 2011 compared the antioxidant benefits of raw Spirulina versus Spirulina that had been fermented with lactic acid bacteria. While the results of the study showed that both forms of Spirulina could defend against oxidative stress, researchers found that fermented Spirulina was better equipped to scavenge free radicals and protect the body against inflammation.12

Because fermented Spirulina is pre-digested, it is the best form of Spirulina for anyone who may have a difficult time breaking down and assimilating food. Children can be particularly vulnerable to digestive troubles and prone to a picky palate, so we make a special recommendation that they only supplement with the fermented form of Spirulina.

Spirulina is one of the most potent superfoods available. In one recent study, schoolchildren in Senegal performed better in school after taking 2 grams of Spirulina for only 60 days. Spirulina is made up of 62 percent protein, and it also contains essential amino acids, polyunsaturated fatty acids, minerals, vitamins, and polysaccharides that support the immune system.

As a potent source of antioxidants, Spirulina can help to protect your brain against damage and degenerative diseases, including Parkinson’s disease and Alzheimer’s disease. Also rich in antioxidants and the calming amino acid L-theanine, Ujido Matcha Green Tea can benefit the brain by releasing feel-good chemicals and by cultivating a state of relaxed focus.