Restore Your Inner Ecosystem After Menopause

Menopause is a time in a woman’s life when she loses the ability to reproduce.

When a woman goes through menopause, her ovaries no longer release an egg or the reproductive hormones that trigger the creation and destruction of the uterine lining. She no longer gets her period every month. Her hormones experience a dramatic shift. 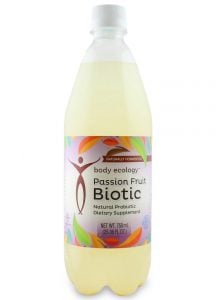 Menopause means a dramatic shift in hormones that can change the vaginal inner ecosystem. Drinking a daily probiotic, like Passion Fruit Biotic, can restore numbers of good bacteria in the birth canal to ease menopausal symptoms like vaginal dryness, tissue inflammation, and pain during intercourse.

As a woman moves through menopause, the healthy microbes living on vaginal tissue dwindle.

With this shift in reproductive hormones, like estrogen and progesterone, women may not know that the vaginal inner ecosystem also changes.

Researchers at the Lawson Health Research Institute in Ontario, Canada, have found that reduced numbers of good bacteria in the birth canal after menopause are associated with:

This means that the microbes living in the birth canal may influence how quickly vaginal tissue ages. (1)

As the Vaginal Inner Ecosystem Ages

According to the Mayo Clinic, as vaginal tissue ages, it may come into less contact with the reproductive hormone estrogen. (2) The “aging” of vaginal tissue happens because estrogen prompts the expression of genes that protect and nourish vaginal tissue, reducing dryness and irritation.

Vulvovaginal atrophy (VVA) is a common condition, affecting as many as 47%-62% of women. Signs of VVA include:

Without enough lactic acid bacteria, other microbes have the opportunity to grow, inflame vaginal tissue, and cause infection.

A team of researchers at Johns Hopkins and the University of Maryland have found that the inner ecosystem of the birth canal changes as a woman transitions through menopause. (3)

As a woman moves through menopause, the healthy microbes living on vaginal tissue dwindle.

Pulling from a pool of 87 women, ranging in age from 35–60 years old, researchers used genomic testing to analyze groups of vaginal bacteria. They found that many women with vulvovaginal atrophy have a specific mix of microbes, which may lead to symptoms of VVA and other common signs of menopause.

And while prescription, low-dose estrogen can increase blood flow in vaginal tissue and turn “on” genes that protect cells from dryness and irritation, this form of estrogen has its drawbacks. (4) Estrogen pills and creams for VVA often move systemically throughout the body. (5) Some women cannot tolerate increased levels of estrogen—this includes certain survivors of cancer.

The latest research tells us that probiotics may help manage the communities of vaginal microbes. Researchers at Johns Hopkins are even hopeful that probiotics might prevent or treat VVA in the future.

Natural Menopause Remedy: How to Restore Your Inner Ecosystem

Within the last decade, several studies have shown that oral probiotics can reduce vaginal infections. For example, in 2003 Gregor Reid and Alan Blocking at the Lawson Health Research Institute in Ontario, Canada, demonstrated that lactic acid bacteria can displace and even kill harmful microbes in the birth canal, including those that cause urinary tract infections. (6)

They go on to explain that, “In a society that focuses on disease rather than health and drug therapy rather than natural preventive measures, it will take some effort to get remedies such as probiotics into mainstream care.”

Today, researchers at the Scientific Institute in Milan, Italy, found that certain strains of probiotic lactic acid bacteria can relieve vaginal bacterial overgrowth, which is common during menopause and after. (7)

Researchers also note that there are no side effects with probiotic therapy.

Studies show that oral probiotic therapy is enough to shift the vaginal inner ecosystem. (8) And researchers are confident that, “These microorganisms might regenerate the vaginal ecosystem, thus eliminating the relapses associated with treatment of the infection.”

A small serving of fermented foods or a few ounces of a fermented beverage with every meal is more potent than probiotic pills you can find in the supermarket. It’s the perfect way to support the balance of bacteria living in the gut and in the birth canal.

Menopause marks the end of a woman’s reproductive years. It’s a time when a woman will no longer get her period, and she will experience a significant change in hormones. This hormonal shift will also cause a change to the vaginal inner ecosystem.

Numbers of good bacteria in the birth canal may drop after menopause to cause:

All hope isn’t lost for women entering menopause. Research supports the fact that probiotics may help to prevent or treat vulvovaginal atrophy in the future. Oral probiotic therapy can shift the vaginal inner ecosystem and comes with no side effects. Enjoying fermented foods or fermented beverages with each meal can support a healthy balance of bacteria both in the gut and in the birth canal.