A solution to gastrointestinal distress: Use probiotics for bloating

Maybe you ate something that you thought you could digest, only to discover that an hour or two later your belly is bloated, and you are experiencing gas, spasms, and pain migrating throughout your abdominal area. This uncomfortable feeling can persist for hours. Drinking a full glass of homemade coconut water kefir or one of Body Ecology’s probiotic beverages, like InnergyBiotic, is a simple and safe way to ease digestive discomfort.

Recently, the Journal of Clinical Gastroenterology released a study describing the relief that beneficial bacteria can impart upon an inflamed intestinal tract.

Sixty people with functional bowel disorders and without constipation, all averaging around the age of 37, volunteered for the study. 72% of the participants were women. (1)

The volunteers were split into two groups: one group was dosed with a combination of beneficial bacteria at 200 billion colony forming units (CFUs) per day while the other group received placebo. The trials went on for 8 weeks.

The study found that after eight weeks of supplementation, a combination of Lactobacillus acidophilus NCFM and Bifidobacterium lactis Bi-07 reduced gastrointestinal bloating by 27%. The team reports that data gathered from the study “support the role of intestinal bacteria in the pathophysiology of [functional bowel disorders] and the role for probiotic bacteria in the management of these disorders.”

While the incidence of gastrointestinal disorders has been on a steady rise, especially since the industrialization of wheat and the advent of high fructose corn syrup, fermented foods are traditional fare.

Most of us have heard of yogurt. But how may of us know what a beneficial microbe is? If we are eating the Standard American Diet, do we understand the symbiotic role that good bacteria play in our overall wellbeing? Even though our ancestors cultured sauerkraut, yogurt, and kimchee or prepared fermented beverages like kefir and kvass, these healthful traditions have been nearly forgotten.

Because, while these certainly are not convenience foods, fermentation does something to food that nothing else can: it supplies our guts with beneficial microorganisms. The general American population, still eating the Standard American Diet that largely consists of meats, sugars, monoculture carbohydrates, and overly processed food, is beginning to show a greater interest in probiotic supplementation.

This is because gut issues like inflammation, bloating, systemic allergic response, and constipation are becoming more common. Most autoimmune disorders have a relationship to both diet and the state of the interior gut mucosal barrier, which includes the microbial communities housed in the gut.

The same can be said about childhood developmental disorders like ADHD and autism spectrum disorder, as well as neurodegeneration: the integrity of the gut and diet both play a substantial role in their genesis and development. Not only that, but studies show a relationship between disorders such as obesity or depression and gut bacteria.

Research continues to unravel the various ways that beneficial microbes serve our immune system and our wellbeing.

Each human body is made of roughly 10 trillion cells, while we each individually host about a hundred trillion bacteria. We are outnumbered 10 to 1. Since 2008, the Human Microbiome Project (HMP) has been in full swing. Sponsored by the United States National Institutes of Health, HMP is an initiative to understand how the microbiome, or the collective microbial communities, relates to health.

The project sequences and catalogues microbial DNA, the metagenome of microbial communities, in order to identify the microorganisms associated with human beings in both a diseased and a healthy state.

As scientists uncover the many facets of microbiota and microbiome, eating a diet that is rich in fermented foods is one of the best ways to make sure your inner ecology is intact and thriving.

Do you struggle with bloating on a regular basis? A diet rich in fermented foods can rebuild your digestive health and remedy gastrointestinal bloating.

Sometimes, transitioning to a diet that places a great deal of focus on fermented foods and that emphasizes removing sugars, which feed opportunistic microorganisms, can be slow-going. Several foods that would make a condition worse, such as fungal overgrowth or brain fog, are sometimes surrounded by a nostalgic sentiment. The transition oftentimes means letting go and recreating old favorites.

Fortunately, Body Ecology has developed a series of products that support the transition to a diet that enhances the immune system and rebuilds digestive health.

Body Ecology probiotic beverages are refreshing and delicious. They are also a quick and easy fix for gastrointestinal bloating.

While having high-quality convenience products on hand is useful, making your own fermented vegetables and coconut water kefir at home is one of the best ways to become acquainted with friendly microbiota. Homemade cultured veggies and kefir becomes a living food! Making your own cultured foods, and seeing microbes develop from one step to the next, is similar to growing your own vegetables in a garden.

Body Ecology offers both a Kefir Starter and a Veggie Culture Starter. Using the starter packs helps control the fermentation environment and ensures that only beneficial microbes proliferate.

Not only is bloating uncomfortable, but it could be related to an underlying bowel disorder. Fortunately, recent research has confirmed that good bacteria can provide relief to inflammation in the digestive tract.

It’s no coincidence that gastrointestinal disorders are on the rise due to the large amounts of processed foods consumed in the Standard American Diet. If you want to improve your digestion and protect your overall health, it is important to rely upon fermented foods in your diet to give your gut the beneficial bacteria it needs to thrive. Beneficial bacteria not only improve gut health, but they boost our overall immune system and enhance our quality of life! 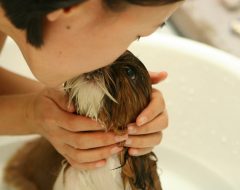 Parasites? Yikes! Enzymes to the rescue to bust up biofilms 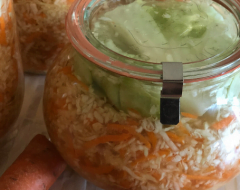 This Ancient Food Has Finally Made a Comeback!