Muscle Testing: How to Communicate with Your Unconscious

You’ve heard of muscle testing, but where does it actually come from?

Dr. Goodheart’s observations began with the muscular system of the body. He found that a muscle spasm is typically the result of other opposing muscles being in a state of imbalance and that correction involves stimulation of the weak or inhibited muscle. (1)

How We Diagnose and Treat the Body

Do we use an X-ray or CT scan to treat an injury? No, these are diagnostic tools. Yet, in China, for over 2,000 years, the energy pathways of the body, or meridians, have been the basis of a system of diagnosis and treatment that uses the body’s relationship with itself in order to diagnose and treat symptoms in the body.

Is there science behind muscle testing?

In 1964, Dr. Goodheart observed what many other scientists, engineers, and theorists were already confirming:

Scientists like Paul Weiss, Harold Saxon Burr, and Leonard Ravitz were investigating the medical and therapeutic implications of a bio-electric field as early as the 1930s. According to Burr, this field was a “blueprint-like mold for all life.”

Muscle Reflex Testing is used to evaluate the subconscious mind through muscle resistance techniques to detect biochemical, emotional, and spiritual imbalances.
The body “speaks” through its muscles.

Dr. Goodheart observed that sometimes an imbalance becomes so extreme that the body’s natural self-healing abilities are inhibited, and the body communicates balance or imbalance, health or disease, through its muscles.

Your fascia is similar to the meridian system.

When Dr. Goodheart was making his discoveries, Western physicians were just beginning to notice entire planes of fascia within the body.

Scientists have found that fascia is arranged along planes within the body. What is astounding is that these fascial planes are incredibly similar to acupuncture meridians! Dr. Jean Claude Guimberteau, a surgeon who works with fascia and muscular structures, has shown that even light touch on the skin can reach deeply into the body’s structures. (3)

By working with the same bio-electric field that scientists are still seeking to fully understand, as well as the extensive network of fascia within the body, Applied Kinesiology evaluates the body through muscle testing.

Using Muscle Testing to Uncover Your Patterns of Imbalance 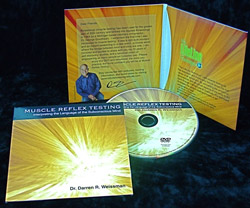 Dr. Darren Weissman developed a system of healing that is called The LifeLine Technique and uses principles of Applied Kinesiology with the principles of reflex and the subconscious mind. His method, called Muscle Reflex Testing (MRT), accesses the subconscious mind through resistance techniques similar to Applied Kinesiology and evaluates the emotional, biochemical, structural, and spiritual balance of person’s body and life.

Learning how to Muscle Reflex Test yourself will allow you to bring the subconscious mind to the surface while engaging the conscious mind. The conscious mind, as Dr. Weissman points out, is where choice exists. Using the LifeLine Technique and MRT, one is able to resolve old patterns and subconscious programs by making us conscious of them. Once there is conscious awareness, there is choice. Through choice, change can occur.

Manual muscle testing will work with the bio-electric field of the body to discover underlying patterns of imbalance in the subconscious mind. Muscle Reflex Testing is used to detect biochemical, emotional, structural, and spiritual imbalances that have accumulated in the muscles. You can learn to Muscle Reflex Test yourself to bring your subconscious mind and body into balance and a state of health.