Is Candida Sabotaging Your Detox? How Candida Overgrowth Can Inhibit the Body’s Ability to Cleanse

While detoxes are popular, especially in the spring and summer, they can cause more harm than good if leaky gut and Candida overgrowth are present.

Candida overgrowth can show up in just about every tissue in the human body.

The detox process mostly takes place in the liver. The liver is your number one detox organ. It helps the body get rid of hormones, pharmaceutical drugs, environmental chemicals, heavy metals, and other poisons that age the body. 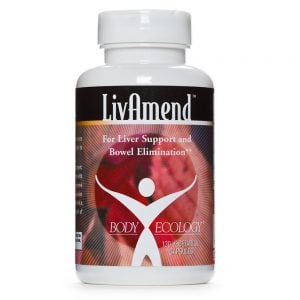 Toxic Candida can make it almost impossible to detoxify your body. During a cleanse, it’s critical to control Candida overgrowth by healing the gut lining, while also supporting liver health with a natural detoxifier like LivAmend.

How does Candida overgrowth affect the liver?

As it turns out, both the gut and liver are your body’s primary defense team. They protect you against invading pathogens, rogue bacteria, dietary irritants, and outside toxins. When unwelcome microorganisms in the body manage to work their way past the gut’s defenses, the liver is on cleanup duty. (1)

Candida Produces Its Own Toxins

Candida albicans is an aggressive fungus that is commonly found in the mouth, intestines, and birth canal of healthy people. (2)

Candida is opportunistic. It has evolved to outwit a weakened defense system.

Candida overgrowth can show up whenever we are under extra stress, when we take a round of antibiotics, when we consume excessive amounts of sugar, or when the immune system is thrown out of balance.

Studies show that Candida produces massive amounts of a poison called acetaldehyde. (3)(4)(5) This is particularly true when Candida grows unchecked and unregulated.

In the human body, acetaldehyde is also a byproduct of alcohol metabolism. If you are wondering what this means, imagine the feeling of a hangover. Acetaldehyde is responsible for much of the toxicity that you may associate with alcohol. In fact, it is 10 to 30 times more toxic than the alcohol that it usually comes from. (6)

When it comes to the toxic effects of acetaldehyde, we often feel it in the brain. This can mean headaches, sensitivity to light and sound, and even feelings of depression or anxiety.

From Hangovers to DNA Damage: The Toxic Effects of Acetaldehyde

While acetaldehyde may be responsible for the feeling of a hangover—or the brain fog that is associated with drinking alcohol—it is also a powerful carcinogen. (7)

Acetaldehyde directly affects the DNA in our cells.

If this sounds ominous, it is. It turns out that when a chemical binds like acetaldehyde does to our DNA, it creates something called a DNA adduct. And this is one of the first steps toward the development of cancer. (8)

One study published in the Archives of Toxicology found that acetaldehyde binds to DNA in brain tissue. An accumulation of acetaldehyde has been associated with Alzheimer’s disease. (9) If the body cannot effectively clear acetaldehyde, a buildup can lead to oxidative stress and damaged DNA. (10)(11)(12)

Putting aside the aggressive nature of Candida, its toxicity alone is enough to cause leaky gut!

Studies have found that acetaldehyde can directly increase gut permeability. Long story short, it interacts with inflammatory signaling. It then changes how tightly gut mucosal cells cling together. (13)

Research shows that chronic alcohol exposure changes the balance of bacteria in your inner ecosystem. It feeds bacterial overgrowth and makes your gut leaky. (14)(15) So even a half a glass of wine with dinner for those with Candida overgrowth may make healing the lining of the gut very difficult.

Another study shows that alcohol is associated with both a leaky gut and the movement of bacteria (and fragments of bacteria) into circulation. (16) In this study, researchers determined that it takes a 2 week period of abstinence in order for the gut to start healing.

An important first step in nutrition for those with Candida overgrowth or leaky gut is to incorporate cultured vegetables into the diet.

When you ferment or culture your vegetables, they are pre-digested; the nutrients and enzymes are more bio-available. Cultured vegetables also inoculate the gut with beneficial bacteria. Beneficial bacteria soothe inflammation and compete with Candida for nutrients.

Add broccoli, cauliflower, or another cruciferous vegetable to your homemade cultured veggies because they aid the body in making glutathione. Glutathione is the most valuable antioxidant in the human body and plays a critical role in the detoxification process. (17)(18)

The liver relies on a steady supply of glutathione. When levels of glutathione are low, detoxification slows down, and the liver becomes congested and toxic. Research also tells us that glutathione can help to detoxify acetaldehyde from tissues. (19)

Supporting your liver is extremely important when planning a detox.

Body Ecology’s LivAmend has been formulated with milk thistle, artichoke extract, sarsaparilla, and wasabi to help maintain healthy liver and gallbladder function. The specific extract of milk thistle in the formula contains a group of flavonoids called silymarin. Silymarin goes directly to the liver, helping to repair damaged tissue and support the production of glutathione.

Believe it or not, a cleanse may do more harm than good if you suffer from Candida overgrowth and leaky gut. Detoxification occurs primarily in the gut and the liver. Candida overgrowth throughout the body can weaken the immune system and produce its own toxins when left unchecked.

Candida overgrowth may be the result of:

Candida yeast will produce a toxic poison called acetaldehyde, which is also a byproduct of alcohol metabolism. Acetaldehyde can trigger a hangover-like response; moreover, it is a carcinogen that can damage cellular DNA. Acetaldehyde toxicity caused by Candida overgrowth can lead to gut permeability, resulting in leaky gut.

Before considering a cleanse, it’s critical to heal the gut lining and control Candida overgrowth by adding cultured vegetables to your diet. To cleanse safely and effectively, start by supporting liver health before a detox with LivAmend to promote both healthy liver and gallbladder function.