HERE’S THE FACT: Your gut is a battlefield (and you may not be winning)

Millions of people are suffering from digestive problems, and you may be one of them. We know that gut problems can feel like a mystery, especially if you’ve been diagnosed with SIBO or IBS or other digestive issues, often after years of undiagnosed symptoms.  This is why we’re so excited to introduce you to a product that we’ve been working on for a while that can be a game changer for most digestive health issues.

Body Ecology’s EcoPhage product supports the digestive system to wipe out bad bacteria FAST that can cause most digestive problems.

The bacteriophages in EcoPhage act like a superpower cocktail that exclusively attack gut pathogens and leave healthy gut flora completely in tact – cleaning up your gut to restore order and promote a healthy immune system.  Phages act quickly1, and are effective against antibiotic-sensitive and antibiotic-resistant bacteria and disrupt bacterial biofilms that can disable treatment from occurring2.  This hugely supports SIBO, IBS, and UTI recovery, heart and colon health and even lowers cholesterol! 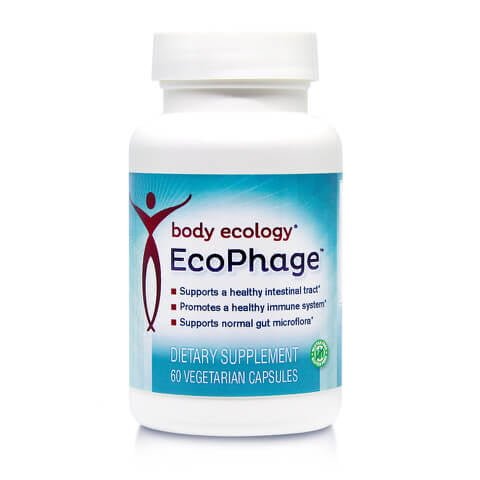 How Does It Work? EcoPhage is a cocktail of extremely tiny viruses, four of them, in fact, that has the ability to seek out and identify only the bad or pathogenic bacteria in the gut, urinary tract, or the birth canal, and destroy them.

EcoPhage is a prophylactic virus. It travels into your small intestine and immediately recognizes any pathogenic bacteria living where it’s not supposed to be, and it attacks. It attaches itself to the cell wall of the bad bacteria, and only the bad bacteria.  It then punches a hole in its outer membrane, and injects its own DNA right into the bacteria. The phage virus comes alive at that point, eats the nutrients inside the bad bacteria and starts growing trillions of copies of itself.

So many copies are reproduced that the bad bacteria swells up, and explodes, spilling trillions of new viruses out into the bloodstream.  These viruses then find other bad bacteria to infect, destroying them too. Sounds like material for a horror movie, but remember, phages only go after the bad bacteria that are inflaming your gut wall and causing leaky gut.

Bacteriophages like EcoPhage selectively target specific, harmful bacteria while leaving beneficial microbes to flourish. (In fact, this was pioneered in Europe before the advent of antibiotics.)  It’s important to understand that this is one of our most relevant tools to treat BAD bacteria – AND it has existed everywhere bacteria exist, for millions of years, including the soil and deep within the earth’s crust, as well as inside plants and animals, and even in the oceans.

It’s sort of nature’s built in checks and balances system. And good bacteria in your gut naturally limits the growth of other harmful bacteria. So it makes sense that EcoPhage also promotes a healthy immune system, to help your body protect against infection naturally. No matter where you are in your health journey, this is a product to have in your everyday health arsenal, and one we are proud to share with you.

Yet, if you want even faster recovery from the toughest digestive issues, check this out.  Let EcoPhage eat up the bad bacteria while building up the good bacteria with our creamy, delicious Probiotic Protein Shake and end the ongoing battle in your gut.

As a powerhouse prebiotic, unlike many others, EcoPhage contains four of the most well researched phages that destroy bad pathogens, creating the perfect environment for Body Ecology’s 5-star Probiotic Protein Shake to populate the digestive system with the right probiotics it needs.

And TODAY, this Gut Balance bundle is 20% OFF. 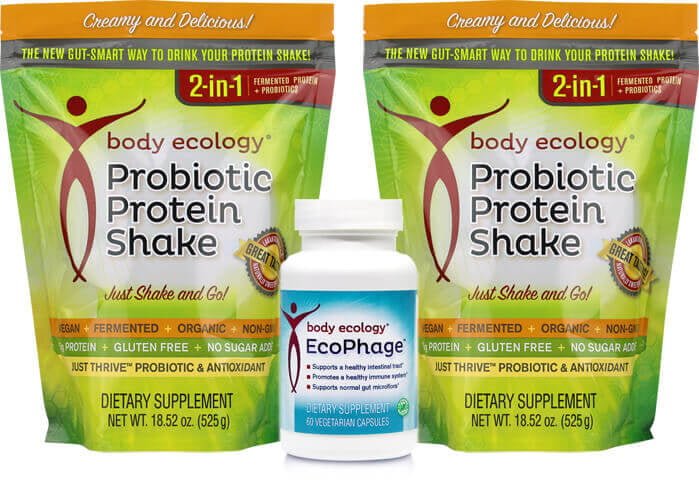 Here’s what you need to know about PHAGES:

4) MOST IMPORTANT:  They won’t hurt you or any of the beneficial bacteria in your body!

Research shows that they encourage the growth of the most important bacteria, especially bifidus, lactobacillus, and the bacillus bacteria. (Those are the really wonderful bacteria that thousands of our customers have been enjoying in our Probiotic Protein Shake!)

Unlike other prebiotics, EcoPhage works quite differently. Instead of feeding them, like FOS would do, for example, EcoPhage kills the bad guys, leaving more food (and space) for the good guys to remain in the game.  And even though they’re bad, there are nutrients inside the cell walls, and when they explode, those nutrients become food for the beneficial bacteria. So, in a rather bizarre and strange way, and an indirect way, phages are feeding the good guys.

Science shows that phages lower inflammation and infections in the gut, the urinary tract and in the vagina. They’ve been shown to improve cholesterol levels too. You can be sure, as scientists continue to study these natural antibiotics, we will be hearing a lot more wonderful things about what they do.

In our new EcoPhage, we have a cocktail of the four most well researched phages. A cocktail is better than one single phage, because phages target one special pathogen at a time. The genome of the bacteria phage, T41, for example, has the genes to kill pathogenic E. coli. E. coli is a natural inhabitant of the digestive tract, but can easily become pathogenic.

Phages are commonly found in nature. In fact, there are far more phages on the planet than there are bacteria!  You’ll find plenty of phages in fermented, or cultured vegetables, and this is one of the many good reasons for eating just a few tablespoons of cultured vegetables with every meal.

Phages are actually mother nature’s natural antibiotic. Scientists have known about them for decades, but mainly the widespread use of antibiotics took over.  And now because of antibiotic resistance, they’re being taken a bit more seriously.

So the science of phages has been buried, and it’s time for them to reemerge and let nature’s most dangerous virus … well, dangerous, that is, if you’re a bad bacteria … become your guardian angel. Learn more here.