A must-read for athletes: Help for exercise burnout and weakened immunity

A 2011 study published in the Nutrition Journal revealed that competitive male cyclists using a probiotic supplement had a 50-percent decrease in symptoms of upper respiratory tract infection. 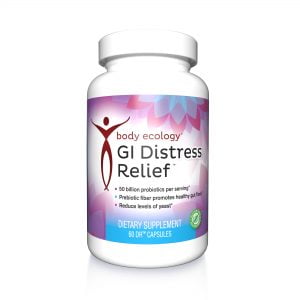 We all know regular exercise is good for us, but athletes fall within a different category — strenuous exercise may inflame the body.

When it comes to probiotics for athletes, a daily supplement, like Body Ecology’s GI Distress Relief, can be a prime supporter of immunity.

Extreme exercise can result in blood poisoning by causing bacteria to leak into the bloodstream.

Probiotics for athletes: What does the research say?

The randomized control trial, conducted in 2011, took a sample of 99 people, 64 of which were male and 35 were female. They were all an average age of 35 years old and all competitive cyclists. For 11 weeks, participants were randomly assigned to receive either a placebo or a probiotic supplement.

These results give us more insight into what researchers have been trying to explore for years: how probiotics for athletes impact performance.

In 2015, when researchers examined the clinical and physiological effects of probiotics for athletes, they confirmed that — because of probiotics’ ability to directly interact with gut microbiota — probiotics may interface with the immune system and influence immune signaling with organs and other systems in the body. Researchers also considered good gut health important to help the body adapt to exercise and physical activity.2

Getting into the habit of exercising from a young age can change gut bacteria for the better, improving metabolism and brain health over a lifetime.3

A 2014 study conducted in association with the Irish Rugby Football Union found that both exercise and diet can affect microbial diversity in the gut — athletes were found to have more diverse gut bacteria than the control group.4 High microbial diversity has been linked to good health.

Scientists have even investigated bacteria-rich bovine colostrum, similar to mother’s first milk, to use as a tool to reduce gut permeability, or leaky gut, in Olympic athletes. Another reason probiotics for athletes may be beneficial: Exercise-induced gut disorders, like leaky gut, are known to be especially common among runners.5

Looking for the right supplements to rev up your workout? Exercisers and athletes love our plant-based sports performance pack.

Here’s where the gut-brain connection comes in

While researchers in the original Nutrition Journal study concluded that more studies were needed to determine why there was a difference between genders, they did look at pro-inflammatory and anti-inflammatory cytokines as possibly being responsible for the variation.

Cytokines are small protein molecules that modulate the immune system:

Brain fog, especially after eating an allergenic food, is one of the most common associations between the gut and the brain. An excited immune system with the release of pro-inflammatory cytokines that originate in the gut means the entire body goes on red alert. This is especially true of those tissues that are rich in glial and immune cells.

Cytokines are similar to hormones.

Sometimes, the effect of cytokine communication is systemic, rather than simply local and restricted to one area of the body. Some cytokines will actually trigger the release of other cytokines; for this reason, they are of particular interest in understanding autoimmune conditions and systemic inflammation.

Certain cytokines are considered biomarkers of systemic inflammation. These are:

These biomarkers are associated with age-related diseases, such as diabetes and atherosclerosis. CRP has been strongly implicated in the development of atherosclerosis, as it shows up in coronary artery smooth muscle cells. Also, IL-6 and TNF-alpha have been found to activate CRP.

Interleukin-12 (IL-12) modulates the T helper cell 1 (Th1) and T helper cell 2 (Th2) responses and has been implicated in autoimmunity. It is also a precursor to TNF-alpha, a pro-inflammatory cytokine mentioned above. Interestingly, intestinal flora may enhance IL-12 production in the spleen.6

How exercise can impair inflammatory regulation

Several studies have found that while moderate exercise benefits the immune system, repeated strenuous exercise has been found to actually harm the cellular immune system and increase inflammation. This is because the body sees intense exercise as a physical stressor, impinging on immune cell function.

The answer is somewhere between the two:

The best way to approach exercise, as an athlete or everyday exerciser, is by giving your body the fuel it needs to move and compete.

Our vegan Probiotic Protein Shake offers probiotics for athletes, supporting energy, endurance, and gut health at all levels of activity. For daily probiotic protection needed for strenuous exercise, our GI Distress Relief is designed to relieve gut disorders — including gas, diarrhea, constipation, bloating, and stomach pain — while equipping the immune system to fight off infection.

When all else fails, don’t forget the Body Ecology Principles of Step-by-Step and Uniqueness. Approach each exercise one step at a time so that you don’t over-extend or over-stress your body. And with each physical challenge, remember that we’re all unique — a high-intensity exercise that works for one person may be damaging to another.