While many of our readers have been following the Body Ecology way of life for a long time, many more are finding us daily as they see the results that come out of how to cook to heal.  To heal from SIBO, IBS and other urinary tract, gut and colon issues, eliminating certain foods and taking a heavy duty probiotic probably won’t do the trick (remember how we always say, CFUs don’t count – what counts is whether that probiotic can get to the gut with 100% survivability).

And to make it easier for those suffering, we outlined the NEW protocol for SIBO & gut health that goes over a step-by-step process designed to obtain results in even the worse cases that seem hopeless.

So while destroying the bad bacteria with phages, increasing motility and re-populating the good bacteria are essential, the process won’t work optimally on a diet that doesn’t focus on eliminating and then reintroducing the right foods while adding in fermented foods synergistically.

This is why in stage 1 of the BE diet, the focus is on low carb, gluten and casein free foods as well as fermented foods. Stage 1 is followed for about 3 months and then we recommend slowly widening out what you eat (if your body allows it) and eating other healthy foods such as whole grains. No, certain whole grains are not the evil foods many health care advocates would have us believe. In fact, many of us need them for energy, our thyroid, better elimination, reducing anxiety and sleeping better.  We’ve even been teaching this elimination diet for 30 years!

(You’ll find much more on how to step into stage 2, and also enjoy many delicious stage 1 & 2 recipes in our cookbook.)

What goes in, must come out…

When starting the diet, most people initially feel much better right away, but there will definitely be days when people don’t feel so great.

1) The body has become stronger and is ready to push out toxins so it can continue to heal.

2) The yeast and other pathogens (including Lyme bacteria) aren’t being fed anymore, so they have been starving and then dying. They produced toxins when they were alive and reproducing inside the body, but now as they die, they must be eliminated.

3) Far too many toxins are ready to come out of the body, but the detoxification pathways just cannot support this.

While our body was created to eliminate external and endogenous toxins (if it didn’t, we would die) that yucky feeling that you may experience means a lot of toxins want out now and this is where enemas come in (even colonics too).   Yes!  An Enema!

So let’s get those toxins out…

Here’s the bottom line. Early on — or at some point — people reach a plateau and feel worse because more yeast and pathogenic bacteria are dying off quickly and need to be eliminated from the body. Enemas are a wonderful tool to help you quickly feel great again.

An enema is a method to flush waste out of the colon. It’s not such a bad idea when you consider that the average person may have up to 10 pounds or more of non-eliminated waste in the large intestine! Imagine what those stagnant toxins can do to your small intestine and the rest of your digestive tract?

We go over the various steps to properly doing an enema here, and also recommend doing an implant with the enema water after you’ve had the last bowel movement once the enema is complete. The implant is quickly absorbed by the colon, and is designed to add in some good after all the bad has been removed.   This should be done in a small amount (1 tablespoon worth) with either a blend of humic, fulvic, micro and macro minerals and amino acids (to support the thyroid and adrenals, and also provide food for good bacteria), coconut kefir (repopulating good bacteria) or even apple cider vinegar (breaks down biofilm).

Hold the implant as long as possible too – this is what we call the soaking method – let it soak in, breaking down anything that it needs to, so it can help re-populate the good!

When do you do this in the SIBO step-by-step process then?

Anytime during the steps.

So let’s put it all together…

Step #1: When on a probiotic-rich, low carb, gluten and casein free diet and add in a powerhouse phages product designed to kill the bad bacteria in your intestines, enabling the good bacteria to also grow.

Step #2: To start re-populating the good bacteria, you can start adding in bifidus with the phages, especially since they help magnify the bifidus! So you’re re-populating good bacteria with beneficial bifidus, which is important for the colon and bacillus and S. boulardii are imperative for the small intestine.  These also help support a healthy immune system, which the body needs to fight bacteria and prevent it from re-growing.

When you add in branch chain amino acids, wonderful changes happen in the intestines, and they will be happening fast. This kills the pathogenic bacteria in your colon and small intestine and also builds the immune system. 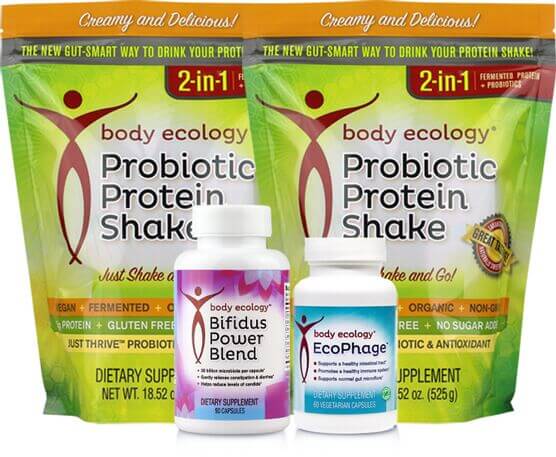 This perfect combination of the right diet – a delicious diet that feeds you, but starves the pathogens accompanied by phages that kill the bad bacteria and probiotics that have 100% survivability to repopulate the good bacteria can help those chronically suffering with gut health issues reach the best health ever.

Depending on your condition(s), please remember to also consult with a nutritional genomics practitioner and/or functional medicine doctor prior to doing an enema.