Research at the University of Lille Nord de France suggests that Candida yeast overgrowth can trigger the development of inflammatory bowel disease, including Crohn’s disease. (1)

Those with Crohn’s disease are more frequently and more heavily colonized by Candida yeast.

Scientists make the claim that Candida yeast may instigate the inflammatory process, which primes the immune system for a series of signaling that ultimately leaves the gut confused and tired. 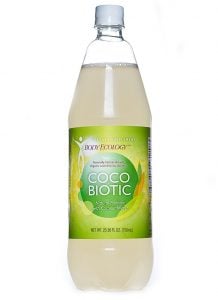 Crohn’s disease is an autoimmune disease that affects thousands of men and women throughout the U.S. Daily probiotics, from a probiotic drink like CocoBiotic, can support healing in a wounded inner ecosystem that may be at the root of Crohn’s disease.

Crohn’s disease affects the digestive tract. And the most common place for autoimmune destruction to show up is somewhere at the end of the small intestine or the beginning of the large intestine. Other autoimmune disorders that affect the digestive tract—like celiac disease or ulcerative colitis—happen in more specific regions of the gut, such as only the small intestine or only the large intestine.

In the United States, between 400,000 and 600,000 people are affected by Crohn’s disease. In Europe, the numbers are higher with roughly one million people that have a diagnosis of Crohn’s disease.

In a 2012 paper published in Nature Reviews Gastroenterology & Hepatology, a team of researchers noted that the inner ecosystem plays a “major role” in regulating the immune system. (2) This dynamic is especially critical in those with autoimmune disease, who have lost the ability to regulate the immune system.

Researchers go on to explain that lesions along the intestinal wall are created when the immune system is sick—and in its confusion, it mounts an overzealous attack on gut microbes.

The collateral damage is intestinal tissue.

For example, research shows that those with Crohn’s disease are more frequently and more heavily colonized by Candida yeast. (3) In animal studies, Candida yeast overgrowth directly triggers the development of inflammatory bowel disease. (4)

The Danger of Giving Antibiotics to Children

While there is a clear relationship between inflammatory bowel disorders—like Crohn’s disease— and intestinal microbes, scientists are uncertain if these changes within the inner ecosystem are a cause or a consequence of disease.

In a 2012 study that followed over one million children, those who received antibiotics during their first year of life were over five times more likely to develop an inflammatory bowel disease (like Crohn’s disease) than children who did not receive antibiotics. (5)

Dr. Matt Kronman, lead author of the study and an assistant professor of pediatric infectious diseases at the University of Washington School of Medicine in Seattle, says that, “There appears to be a ‘dose response’ effect. The more antibiotics children took, the more their risk increased.”

According to the study, antibiotics that were most associated with the development of irritable bowel disease were:

Overall, the study noted an 84% increased risk of developing irritable bowel disease with antibiotic use.

During the first year of life, the inner ecosystem is developed, the lining of the gut seals, and the immune system is primed for a lifetime of interaction with your environment. No time is more valuable than this first year.

When you take a course of antibiotics, you attempt to destroy all good and all bad bacteria. Often, antibiotic use allows Candida yeast to grow unchecked and unregulated. Candida yeast overgrowth inflames the intestinal wall, making it leaky. This assists Candida in crossing the intestinal barrier and infiltrating the rest of the body, making the infection systemic.

Both physical and emotional stress can throw the inner ecosystem out of balance, giving Candida yeast an opportunity to dominate the intestinal environment and make you sick.

Eating according to The Body Ecology Diet, which is sugar-free, gluten-free, and initially casein-free, is the best way to deter Candida yeast overgrowth. If you suspect that you already have yeast overgrowth (take our quiz), then it is critical to bring the yeast overgrowth under control.

In order to combat the wear and tear of stress on the body and on your inner ecosystem, we suggest nurturing the body with probiotic-rich foods like cultured vegetables and probiotic beverages.

Candida yeast overgrowth in the body can contribute to the development of inflammatory bowel disease, including Crohn’s disease. Crohn’s disease is an autoimmune disease that may be diagnosed in the 20s or 30s. Crohn’s disease will come with symptoms like abdominal pain, diarrhea, vomiting, and nutrient deficiency.

An imbalanced inner ecology may contribute to thousands of cases of Crohn’s disease in the US. An inner ecosystem becomes vulnerable without diversity, leaving it susceptible to bacterial and yeast overgrowth. This activates inflammation of the intestinal wall that can lead to more serious disease. Research has proven that Candida yeast overgrowth triggers inflammatory bowel disease.

The Body Ecology Diet provides hope for a robust inner ecosystem with a sugar-free, gluten-free, and initially casein-free diet to curb Candida overgrowth. Sufferers of Crohn’s disease especially can benefit from nourishing the body with beneficial bacteria found in cultured vegetables and probiotic beverages.