Cuckoo for coconut: Is it as healthy as you think?

Coconut, coconut, coconut. Everywhere you look, there’s coconut. In shampoo, lotion, energy bars, smoothies, and even as a natural mouthwash. But is coconut massively overhyped?

Not all coconut products are the same, especially fresh versus processed.

Is coconut milk good for you, or just another source of saturated fat? Let’s bust some coconut myths and see what the science has to say about any health benefits (or risks) of coconut.

Research studies show that a high intake of saturated fat tends to be linked to a higher risk of cardiovascular disease.1,2

So, why the claim that coconut oil could actually be good for the heart? 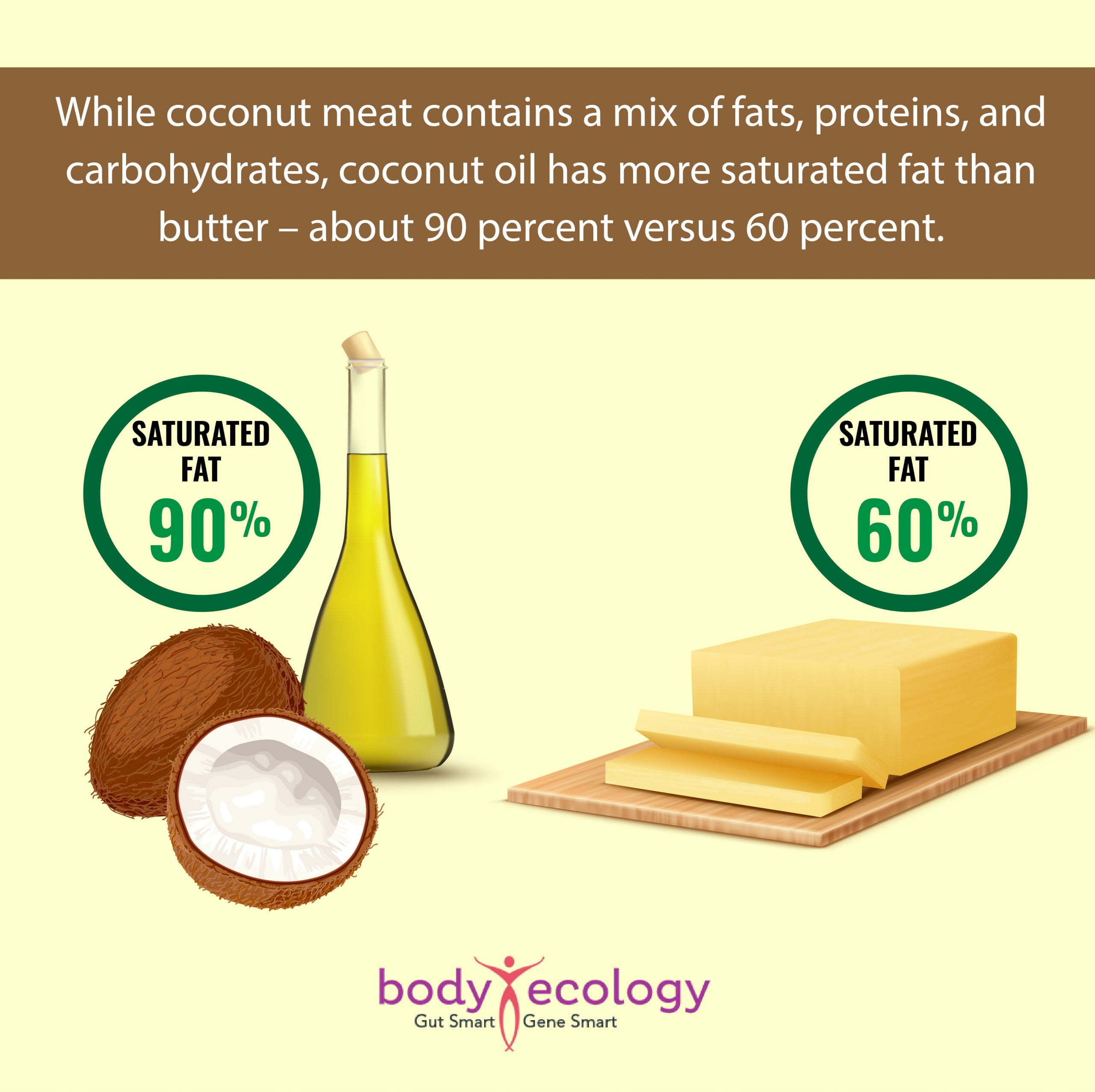 In a review of 21 research papers, including eight clinical trials and 13 observational studies, coconut oil was found to generally elevate total/low-density lipoprotein cholesterol more than non-tropical vegetable oils but less than butter.4

So, is coconut good for heart health?

Verdict: Well, these studies show that while coconut oil may be better for some people than butter or other animal fats, unsaturated fats are far better for reducing risk factors for cardiovascular disease. This would mean that olive, avocado, and fish oil are better choices.

Claim #2: Coconut is rich in antioxidants.

A diet high in antioxidants can help prevent oxidative damage to tissues in the body that can lead to disease and may also help prevent premature signs of aging.5

Coconut, like many plant-derived foods, is a source of antioxidants. Coconut milk, for instance, provides a greater level of antioxidants than cow’s milk and many plant milks. What’s more, these antioxidants seem to survive cooking, meaning that coconut milk dishes, such as a veggie-rich green curry, could be a good way to boost your antioxidant intake.3

However, it has to be said that coconut is also a lot fattier and, therefore, provides a lot more calories than fruits and vegetables.

Verdict: While coconut does supply antioxidants, it’s highly calorific and shouldn’t be your preferred source of antioxidants. Don’t use it and crowd out other antioxidant-rich foods in your diet.

Claim #3: Coconut is a traditional health food, so it’s good for you.

Those touting the health benefits of coconut often fall back on limited epidemiological evidence from indigenous populations where coconut is a normal part of the diet.6 The trouble is that the kind of coconut products eaten in such cultures are usually either the flesh of fresh coconut or freshly squeezed coconut cream.

In most countries where coconut has increased in popularity in recent years, fresh coconut is rare.

It should also be noted that in populations where large amounts of coconut are consumed, and where this doesn’t seem to negatively affect cardiovascular health, people tend to eat less processed food in general and are more socially connected and active.

Verdict: Well, it’s difficult to draw meaningful conclusions about diet from large population studies, and not all coconut products are the same, especially fresh versus processed. So, while coconut might be part of a healthy diet in some places, those health benefits don’t always translate to other groups of people.

Some of the fatty acids in coconut have demonstrated antifungal activity in laboratory studies, leading to the idea that coconut might help tackle candida infections.

Studies in humans are limited, but a study in mice suggests that compared to a diet rich in beef fat or soybean oil, a coconut-oil-rich diet did help reduce colonization of the gastrointestinal tract with Candida albicans.8 Additionally, switching the beef-fat-diet mice to coconut oil helped to reduce C. albicans colonization.

Verdict: Maybe! There’s a reasonable expectation that the antifungal fatty acids in coconut oil could help keep candida and other fungal infections in check. For more serious fungal overgrowth, however, coconut oil might not be sufficient alone – there just isn’t the evidence to support dietary amounts of coconut as having a meaningful antifungal benefit.

Crisp, refreshing, and packed with probiotics that support gut health to help control candida: Have you tried CocoBiotic yet?

Claim #5: Coconut is good for your skin. 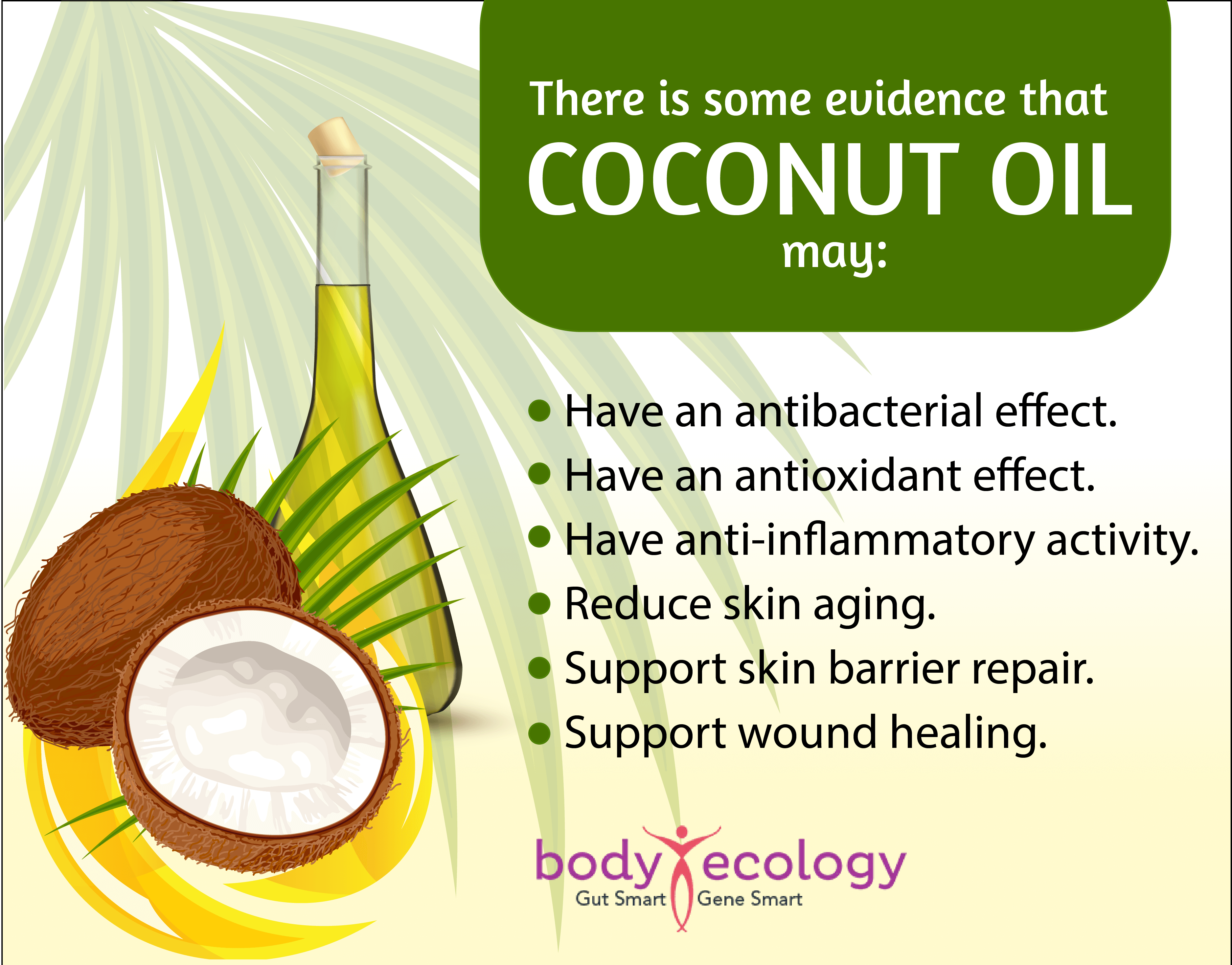 Aside from possibly being useful topically for isolated fungal overgrowth, coconut creams and lotions are often proclaimed to be a natural way to improve skin health.10,11

In one study, virgin coconut oil helped decrease the severity of atopic dermatitis in children and improved skin barrier function by reducing transepidermal water loss.12 Virgin coconut oil has also been seen to support speedier epithelization, meaning that wounds heal faster.11 And, coconut oil has antioxidant and anti-inflammatory effects that may help protect the skin against damage from ultraviolet light, although it shouldn’t be relied on as a sunscreen.13,14

In addition, one of the fatty acids in coconut oil, monolaurin, has an antimicrobial effect against the bacteria that cause acne, Propionibacterium acnes, as well as against Staphylococcus aureus and Staphylococcus epidermidis.15

Verdict: Coconut oil does appear to have a range of benefits when applied topically. It should be stressed, however, that most coconut-based products are not the same as pure virgin coconut oil. Instead, lotions, creams, shampoos, and other coconut-based products often contain very little actual coconut, meaning their benefits for skin health will also be limited.

If you’re curious about blood type and diet, Dr. Peter D’Adamo does not recommend the meat, oil, or coconut milk for any of the four blood types (A, O, B, AB).16 However, all blood types do well on coconut water — and fermenting it to remove the sugar is best!

All in all, while coconut may have a few limited benefits as a food and when used topically, too much focus on this one ingredient could stop you from including other healthy foods or taking other positive steps that are far better for your health.

If you’re going to include coconut in your diet, the water right out of the coconut is your best bet. Or, look for cultured coconut products (like this). You can also use Body Ecology’s Kefir Starter to ferment coconut water. When coconut water is “cultured” or fermented, the nutrients are preserved and enhanced.

For topical applications, consider using straight coconut oil rather than expensive moisturizers and other products that likely contain added ingredients that can actually damage your skin. Coconut oil can also be used as a carrier for essential oils.

As always, remember the Body Ecology Principle of Uniqueness — what matters most is what works for you. Eat the foods that most benefit your body at this present moment. Keep an open mind as you listen to your body’s rhythms and changing needs.