“Hi, I ran across this article that I wanted to share with you. It states that fermented foods are not good to eliminate Candida? Would like your input on this. I think it might just be wrong information. Thoughts?”

Antibiotic use can predispose the human body to systemic Candida overgrowth.

The reality is that many fermented foods are rich in lactic acid bacteria.

These bacteria produce lactic acid and are beneficial to the human body, helping to control Candida and bacterial overgrowth. 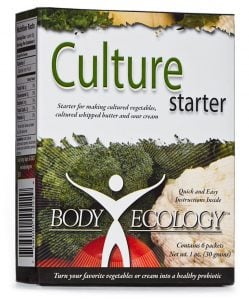 Contrary to popular belief, fermented foods should not be avoided when fighting off Candida overgrowth. Fermented foods, rich in lactic acid bacteria, can help to control systemic Candida.

Candida naturally lives in the gastrointestinal tract (including the mouth), on the skin, and within the birth canal. Besides intestinal Candida overgrowth, Candida is responsible for thrush (an infection in the mouth that can also affect the nipples of nursing mothers) and vaginal yeast infection.

Candida overgrowth is systemic when the yeast travels outside its native environment—the mouth, intestines, birth canal, and skin—to other areas of the body.

When Candida Overgrowth Becomes a Problem

For decades, researchers have known that antibiotic use can predispose the human body to systemic Candida overgrowth. This is because antibiotics kill all bacteria—including the good guys, which keep Candida in check.

You see, Candida yeast is opportunistic. It will take any chance it gets to colonize more tissue.

Besides antibiotic use, the reproductive hormone estrogen also encourages the growth of Candida. (2)(3) This is why women with a history of oral contraceptive use are at a higher risk for Candida overgrowth.

During pregnancy, we also see an increase in the hormone estrogen—thus increasing the risk of Candida overgrowth and vaginal yeast infection. Metabolic disorders, like obesity and type 2 diabetes, are also associated with increased levels of estrogen in the body. (4)

These factors may increase the risk of Candida overgrowth:

“Even a diet high in beneficial fermented foods, like Kombucha, sauerkraut, and pickles, can feed Candida, causing an overgrowth.”

Lumping wild fermentation together with cultured foods is a mistake.

To avoid the wild strains of bacteria that can feed Candida, Body Ecology recommends fermenting vegetables, coconut water, and dairy with a starter culture.

A starter culture contains specific strains of helpful yeast and bacteria that safeguard against the growth of wild and potentially harmful microbes, which may grow without a starter culture. When it comes to fermented foods, research shows that the good bacteria in these foods help fight Candida overgrowth—even outside the gastrointestinal tract. (5)(6)

“Reducing to only a few cups a day of the more complex carbohydrates such as grains, beans, fruit, bread, pasta, and potatoes will prevent the Candida from growing and eventually cause it to die. I would recommend eliminating all fermented food as well.”

From anecdotal evidence that spans the past 25 years and hundreds of thousands of people worldwide who have followed The Body Ecology Diet, we completely disagree that only reducing certain trigger foods is enough. Many of the foods listed above spell disaster for people fighting Candida overgrowth; they should be cut completely from the diet until Candida is under control.

Contrary to what Dr. Amy Meyers suggests about fermented foods, both science and tradition tell us that cultured vegetables, pickles made with probiotic-rich brine, and dairy fermented with a starter can repair leaky gut and combat yeast overgrowth.

Opportunistic Candida yeast is naturally found in the gastrointestinal tract, on the skin, and in the birth canal. Candida may become systemic when it moves to other areas of the body to affect healthy tissue. Candida overgrowth risk increases after antibiotic or oral contraceptive use, during pregnancy, and related to obesity or diabetes.

Should you avoid fermented foods if you want to eliminate Candida? The short answer is no. Fermented foods are rich in lactic acid bacteria that can help to control Candida and bacterial overgrowth.

Wild strains of fermentation like kombucha can make Candida worse. Beneficial fermented foods cultivated from a safe starter culture are recommended. A starter culture contains friendly bacteria and yeast that can protect against wild microbes; these good bacteria will also help battle Candida inside and outside of the gut.