Most folks now know that probiotics are beneficial bacteria (or yeasts!) available in certain fermented foods, as well as supplements, to top up your body’s natural microbiome. But are all probiotics the same? Is there really any benefit to taking one type of bacteria over another?

In short, yes. And this is why strains matter.

It’s only at the strain-specific level that you can really judge the benefits of any given probiotic.

This is in terms of the microbiome in your intestines anyway. Very quickly, however, members of the genus Bifidobacterium start to colonize the human gastrointestinal tract and exert positive health benefits on their infant host.1

Other microbes join them in short order, including beneficial members of the genus Lactobacilli and the yeast Saccharomyces boulardii.  In order to survive in your body and to have any kind of valuable effects on your health, these bacteria need to have certain evolutionary adaptations.

Because of their known health-promoting properties, Bifidobacteria are a common feature of multistrain probiotics and found in functional foods as active ingredients. Not all Bifidobacteria are the same, however, underscoring why strains matter.

In the case above, this strain of acidophilus is associated with the North Carolina Food Microbiology research center.

So, if you thought checking a label for L. acidophilus or B. bifidum was as specific as you needed to get when choosing a probiotic supplement, here’s a reality check. It’s only at the strain-specific level that you can really judge the benefits of any given probiotic.

Two studies using completely different strains of acidophilus could, for instance, have markedly different results. Meaning, lumping these two strains together without telling you what each one does doesn’t help anyone make sound choices for buying effective strains.

The NCBI database holds hundreds of publicly available Bifidobacterium genome sequences, with full genomes available for certain bifidobacterial species. These include B. adolescentis, B. animalis, B. breve, B. bifidum, B. longum, and B. angulatum.

A full lineage (genetic sequence) was recently made available for strain HN019, and the full sequence is also available for Bifidobacterium animalis subsp. lactis Bl-04. These two strains are, quite frankly, a “better Bifidus.”

Actually, most probiotics including Bifidobacteria don’t generally form long-lasting colonies in the gut. Instead, you’ll find them primarily as transient bacteria in the stool, where they’re still very beneficial. They’re breaking down nutrients, helping them to become more bioavailable to you — like minerals — and also helping to produce vitamins — like Bs and K.

Most transient bacteria, including Bifidobacteria, are excreted two weeks or so after they’re consumed, making it essential to maintain probiotic supplementation long-term to enjoy the ongoing Bifidobacteria benefits.2

Looking for a better Bifidus? Exactly where to find it

The Bl-04 and HN019 strains of B. lactis have been subject to a ton of research and have demonstrated significant advantages to health compared to other strains of the same species.

So much so that researchers have noted that mapping the genome of strains in the B. animalis subsp. lactis species can help figure out how bacteria evolve and why some are more or less beneficial to human health.

In particular, researchers have looked into how different strains of this species interact with dietary carbohydrates and the lining of the intestines, as well as how well they resist bile and stomach acid and their impact on the immune system and the rest of the microbiome (including their ability to prevent inflammation in the gut).

Interestingly, some B. animalis subsp. lactis can feed on a certain kind of dietary carbohydrate called nondigestible oligosaccharides, which may be why the organism is so good at surviving longer in the large intestine when other bacteria fail.3

Here’s what the research has to say about the two “better” Bifidum strains to watch out for: 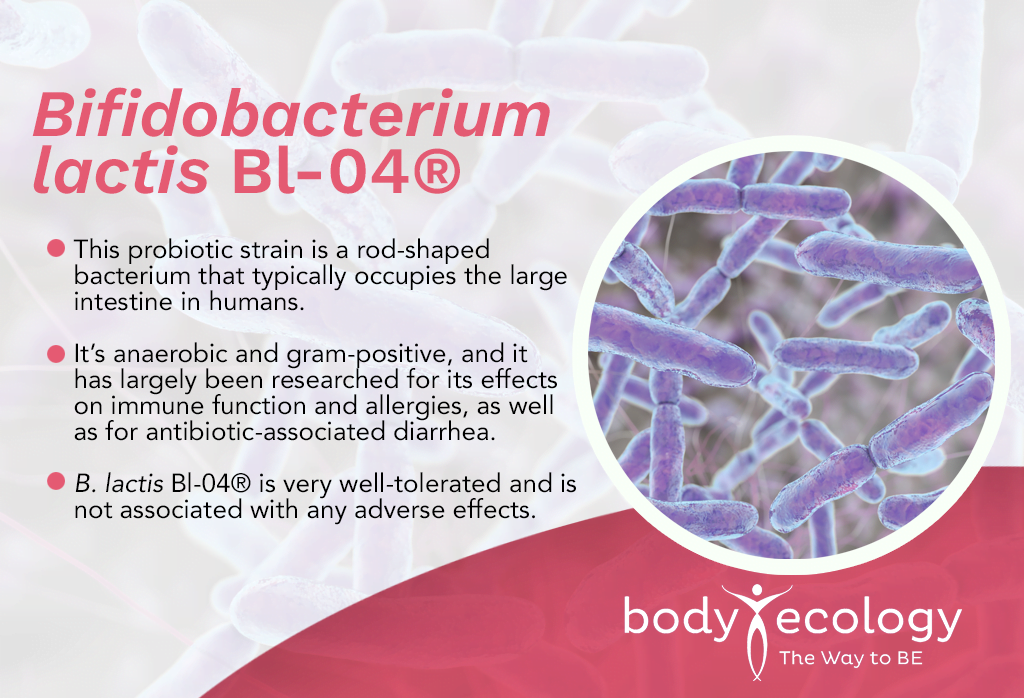 B. lactis Bl-04® has been seen to survive gastric acid — allowing it to get to the gut, where it works its magic.4,5 And what magic it is!

Bl-04 may help support a robust immune response to vaccines, for instance, which would make vaccines even more effective against disease. In one study, B. lactis Bl-04® was given to healthy volunteers for 21 days after they received an oral vaccine against cholera.

Compared to no changes in a group taking a placebo, volunteers receiving B. lactis Bl-04® had significant changes in immunoglobulin serum concentrations, including increased IgG in an early response to the vaccine.6

In another randomized trial, this time involving children with birch-pollen-associated hay fever, those given a combination of Lactobacillus acidophilus NCFM® and B. lactis Bl-04® had a significant reduction in a type of white blood cell involved in allergy control (eosinophils) in the nose, compared to children receiving a placebo. The kids getting probiotics also had less nasal congestion and discharge.7

Many other studies have focused on the immune support associated with Bl-04. An Australian study, for example, found that this strain was highly effective at reducing the number of colds in Australians who exercised regularly.

The double-blind, placebo-controlled study involved 465 healthy people at risk of colds because of the immune-suppressive effects of significant exercise. Again, some participants received a combination of L. acidophilus NCFM® and B. lactis Bi-07®, while others were given B. lactis Bl-04® alone. A third group received a placebo for the duration of the five-month trial.

The Bl-04 group had a 27-percent lower incidence of upper respiratory infections, which was much more pronounced than those receiving the combination probiotic or placebo.8 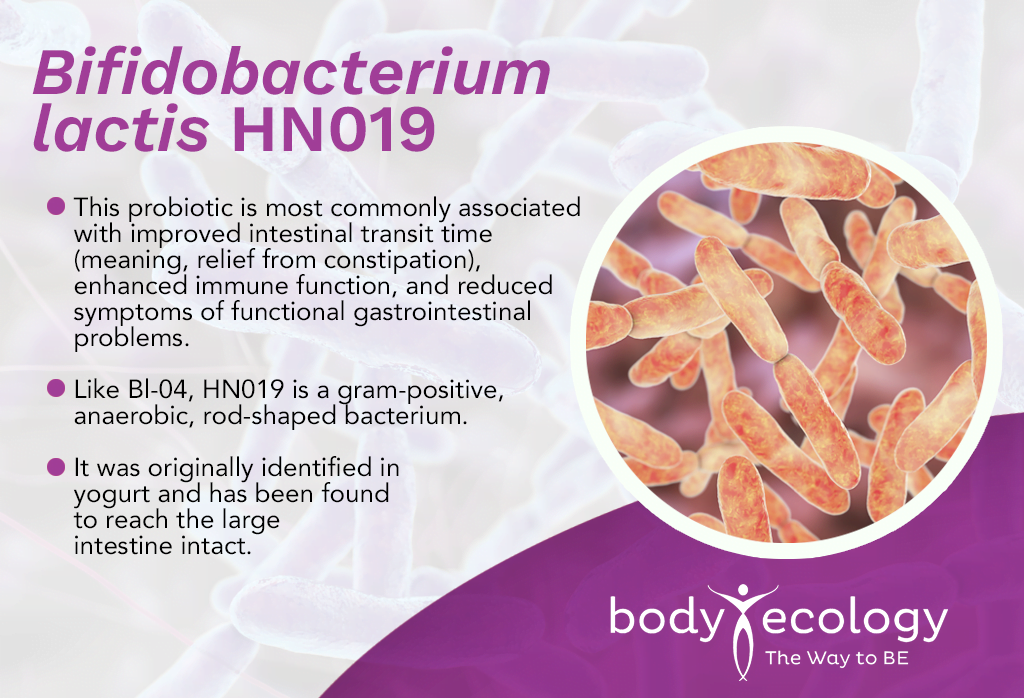 This strain has also been deemed safe in several trials. In one randomized controlled trial, a daily dose of 10 billion colony-forming units of B. lactis HN019 taken for 28 days was found to be safe and well-tolerated.9 Research suggests that this probiotic strain is also safe in pregnancy from 35 weeks’ gestation onwards and in newborns up to 2 years old.10

As for those health benefits, B. lactis HN019 has been shown to support gut motility and relieve gastrointestinal symptoms, seen in one randomized controlled trial involving 88 adults with irritable bowel syndrome (IBS). One group received 17.2 billion CFUs of B. lactis HN019, a second group took a lower dose (1.8 billion CFUs), and a third group received a placebo. Each group continued the protocol for 14 days.11

Both probiotic groups in this study had improvements in gastrointestinal symptoms, with the higher dose alleviating eight out of nine symptoms measured (compared to seven/nine symptoms with the lower dose and two/nine with the placebo). Symptoms included vomiting, regurgitation, abdominal pain, nausea, gurgling, constipation, diarrhea, irregular bowel movements, and flatulence.

The researchers also looked at the participants’ whole gut transit time and found that this improved significantly in the probiotic groups but not in the placebo group. For the higher dose group, transit time was reduced by a third (33 percent), with a 25-percent reduction in the lower dose group.

After 28 days, those participants with the worst constipation had more bowel movements per week when taking the probiotics. The higher dose group also reported less straining, with the study overall supporting the use of B. lactis HN019 to improve bowel regularity.4

B. lactis HN019 isn’t just helpful for constipation, though:

In addition, B. lactis HN019 supports immune system health, with one study finding that supplementing with the strain for three weeks led to notable improvements in phagocytosis (the immune system’s way of engulfing and killing pathogens that cause infection). Interestingly, even the short-term use of this probiotic strain had a sustained effect on healthy immune function for another two weeks or so after stopping supplementation.2

Similar benefits for immune function were also seen in older adults taking B. lactis HN019 for three weeks. The greatest benefits were seen in those with poor immune response at the start of the study.13 A meta-analysis also concluded that B. lactis HN019 supports natural immune system function in older adults, including enhancing phagocytosis and the activity of Natural Killer cells.14

And just as B. lactis HN019 supports older adults:

B. lactis HN019 was also associated with improved iron status and reduced risk of anemia in children aged 1 to 4 years in another trial using a daily milk drink fortified with 19 billion CFUs of the probiotic strain, plus a prebiotic providing 2.4 grams of oligosaccharides, for a year. Children taking the probiotic/prebiotic combo were an impressive 45-percent less likely to develop anemia, compared to the group taking a placebo.16

There’s one final documented benefit of B. lactis HN019 worth looking at before we wrap things up: the metabolic effects of this probiotic strain as seen in a randomized controlled trial involving 51 adults with metabolic syndrome. Participants received either no intervention or 80 mL of fermented milk, providing 27.2 billion CFUs of B. lactis HN019, for 45 days.17

The probiotic group had a significant reduction in body mass index and levels of total cholesterol and the harmful low-density lipoprotein cholesterol (LDL-C).

The researchers also noted a reduction in levels of pro-inflammatory cytokines in the group taking B. lactis HN019, suggesting significant benefits of the probiotic strain for cardiovascular health and other concerns with metabolic syndrome.

What it all means: While B. lactis Bl-04 and HN019 are far from the only beneficial Bifidobacteria, they are two of the strains with the most research to support claims that they can benefit human health. This is why these two strains were hand-picked for our brand-new GI Distress Relief™ formula, alongside Saccharomyces boulardii (a beneficial species of yeast) and Sunfiber® (a prebiotic that helps enhance the growth of Bifidus).