Is your gut health linked to your anxiety?

Do you suffer from excessive worry and anxiety? Anxiety attacks are a very unpleasant experience. Physical symptoms of anxiety can be present even when there doesn’t seem to be a reason to be anxious, making these episodes even more disturbing. 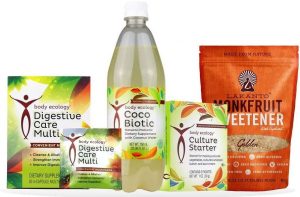 Get everything you need to support gut health and help get a handle on anxiety. Our Good Gut Starter Kit covers all the bases.

More than half of the studies in the review showed that the right diet can improve anxiety.

Being able to identify the physical symptoms of anxiety is important. Rapid heartbeat, shortness of breath, trembling, feeling out of control, and excessive sweating are just a few of the physical symptoms associated with anxiety disorders, whether they manifest in what might be characterized as an “attack” or as less severe symptoms occurring occasionally or even somewhat regularly.

Situational anxiety can also trigger physical symptoms. Anxiety, in general, may leave lasting physical effects on overall health. Why are some people prone to these uncomfortable and sometimes frightening symptoms, and what is the root cause?

Anxiety disorders may manifest in physical symptoms like those mentioned above, but you may be surprised to learn that the underlying cause of such symptoms may have more to do with the gut than with the brain or other emotional energy centers.

Gut health plays an important role in mental health and has been linked to conditions, such as depression and anxiety.1

There’s a pathway by which the gut and brain communicate with each other, known as the gut-brain axis. This communication network begins with the vagus nerve in the brain stem and travels through the major organs and back again; meaning, it’s a two-way connection.

Imagine an entire nervous system embedded in the wall of your gut that constantly communicates with your brain:

How does the gut-brain axis affect mental health? Do the microbes in our gut play a role?

Stress-induced changes to the microbiome may affect the brain and behavior — and these are certainly stressful times. Some studies suggest that inflammatory cytokines, signaling molecules secreted from immune cells (the majority of which are found in the gut) and other types of cells that promote inflammation, can disrupt brain neurochemistry and may make some people more vulnerable to anxiety and depression.2 So, yes, microbes do play a role, and stress kills the beneficial bacteria in the gut, especially Bifidus.

Interventions to improve your gut microbiota, according to research

Researchers have found that manipulating the gut microbiota may help manage symptoms of mental disorders.

A July 2019 review study in the journal General Psychiatry revealed that:3

In the above research review, multiple probiotic strains across varying studies were used, suggesting that no one strain of probiotic is responsible for improving clinical outcomes, but rather, several different strains contribute to positive outcomes in improving gut-brain connectivity and, hence, anxiety. Diversity has been found to be key.

“When a book like Body Ecology comes along, it is a big blessing. If you want to learn how to become your own nutritionist, how to feel good again, with stamina and mental clarity, read this latest edition.” Click here to find out more about the Body Ecology way of living.

What you eat has a major impact on your anxiety

Food plays a very important role in helping to control worry, anxiety, and panic attacks. More than half of the studies in the review above showed that the right diet can improve anxiety. A diet low in carbs and sugars can essentially starve out undesirable bacteria in the gut, leading to a positive effect on the gut-brain axis.

Specific diets, such as a low-FODMAP diet (a diet low in carbs and sugars), eliminate the foods that produce gas and bloating when you have IBS (irritable bowel syndrome). But this diet is challenging and unhealthy in the long run. Because you must eliminate so many beneficial foods in order to starve the undesirable bacteria in the gut, you are not only at risk for becoming nutrient deficient but are also starving out the beneficial bugs.

Onions, garlic, scallions, spring onions, cauliflower, fermented cabbage, and other important vegetables are eliminated — as well as fruits and dairy. If continued more than a few weeks, your ultimate goal of having a healthy gut simply won’t happen.

Fermented foods, like fermented cabbage and vegetables, are ultimately necessary to have a robust and diverse inner ecosystem.

We also know that:

Lowering sugar intake has been shown to lead to better psychological health.4

Anxiety is often associated with hypoglycemia, a condition in which blood sugar drops to an abnormally low level a few hours after a sugary meal or drink. Balancing blood sugar is important in keeping symptoms of anxiety at bay.

Insufficient amounts of certain vitamins, minerals, and macronutrients in the diet can also exacerbate anxiety symptoms.

This underscores the importance of eating a balanced diet. Vitamin B6 is just one example. Vitamin B6 helps the body produce the neurotransmitter serotonin, considered the body’s “feel-good” chemical. Serotonin is produced primarily in the intestines. Low levels are commonly associated with anxiety and depression.5,6

Good sources of B6 are found in fish, beef liver, and vegetables like spinach, potatoes, and peas.

Foods rich in zinc are also beneficial.7 Low levels of zinc, possibly associated with ongoing oxidative stress, may cause lower levels of the neurotransmitter GABA and its precursor, glutamate, having an anxiety-producing effect. Zinc supplementation, which can help raise GABA levels, may help improve anxiety symptoms.

Look for foods high in zinc, such as shellfish (shrimp and oysters), meat and egg yolks, pumpkin seeds, and, surprisingly, fermented dairy. Oatmilk is a good source of zinc if you prefer a dairy alternative.

Eating grain-like seeds (also called pseudo-grains), such as quinoa and millet, and/or vegetarian meals in the evening can also help boost serotonin levels.

Don’t underestimate the power of breathwork

The brain may control the body, but the body can also control the brain. When the mind isn’t where we’d like it to be, we can call upon one special function of our body — breathing with our lungs — to intervene.

Deep breathing is a powerful tool that can be used to shift your brain-state and the stress response quickly.

There is a direct connection from the brain to the diaphragm, a skeletal muscle organ that we can control voluntarily versus other organ tissues that we cannot. For example, your heart rate, blood vessel function, and motility in the intestines are actions that are involuntary. The diaphragm can be voluntarily controlled with breathing and is always available.

There are different subtypes of neurons within the respiratory control center in charge of generating different types of breath, i.e., involuntary rhythmic breathing or quick, double-breath breathing followed by an extended exhale, which can occur when you’re speaking, sobbing, or coughing (a necessary physiological reaction when carbon dioxide levels get too high).8 These quick breaths and extended exhale help to consciously control breathing.

Many have told us that Body Ecology’s probiotic diet— adapted to each individual’s needs — is a winning approach to addressing anxiety, naturally. Focused breathing techniques can also be a potent strategy to gain control in the moment and over time.

A proactive approach focused on diet, probiotics, and breathwork may be a good place to start in controlling anxiety. But always consult a physician, especially if a prescription medication may be indicated.